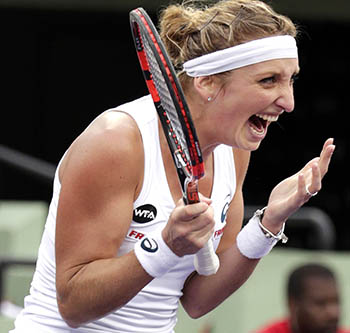 KEY BISCAYNE, Fla.: Switzerland’s Timea Bacsinszky has been the comeback queen of this Miami Open, and is heading to the semifinals after another three-set marathon.

The 19th-seeded Bacsinszky rallied to top fifth-seeded Simona Halep of Romania 4-6, 6-3, 6-2 in the quarterfinals yesterday, continuing her deepest run in four trips to Key Biscayne.

A Russian player will await her in the semis, either 15th-seeded Svetlana Kuznetsova or 30th-seeded Ekaterina Makarova.

Bacsinszky’s last appearance on Key Biscayne before this tournament was 2011, and she didn’t even take a set off Halep in two previous meetings. But she broke Halep for a 3-1 lead in the second set on her way to knotting the match, then took full command by getting two quick breaks for a 3-0 lead in the third.

It was the second straight win against a top-five seed for Bacsinszky, both coming after she dropped the opening set. She ousted third-seeded Agnieszka Radwanska in the round of 16 – each of those matches lasting more than two hours. Bacsinszky’s backhand winner to end the match yesterday came at 2:28.

With Halep out, the only top-10 seed left in the women’s draw is Germany’s Angelique Kerber, who meets American Madison Keys in the quarterfinals today.