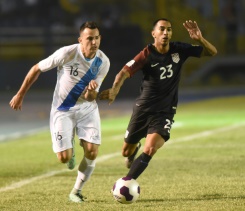 A shock 2-0 defeat to the Guatemalans last Friday had left Jurgen Klinsmann's side facing a must-win return fixture in Columbus, where a defeat would have all but eliminated them from North, Central America and the Caribbean (CONCACAF) zone qualifiers.

US skipper Michael Bradley said the experienced heads in the American starting line-up, which contained several figures from their successful 2014 World Cup campaign, had been crucial.

"We've got a lot of guys who've played these kind of games before and I think our experience and our commitment carried us through," Bradley said.

"It's a great result and we'll keep moving on. For me, the difference was the collective mentality, the willingness of everyone to forget about everything else and when that whistle blew, spill their guts on the field."

Zardes's run panicked Guatemala's central defensive duo of Moises Hernandez and Rafael Morales, who crashed into each other and allowed the loose ball to fall into the path of Clint Dempsey, who rifled home the finish.

It was Dempsey's 49th international goal, leaving him only eight behind Landon Donovan's all-time US record.

Zardes' clumsy touch wrongfooted the Guatemalan defense and Zusi pounced to tuck away the low finish.

The Americans continued to torment the visitors and soon after having a goal wrongly disallowed for offside went 4-0 ahead when Dempsey pounced on another blunder to tee up substitute Jozy Altidore to crash home the finish.

The result vaulted the Americans over Guatemala into second place in the standings in the four-team Group C, behind Trinidad and Tobago, who defeated St. Vincent and the Grenadines 6-0 on Tuesday.

The top two teams in the group qualify for the final round of competition to determine CONCACAF's World Cup contingent.