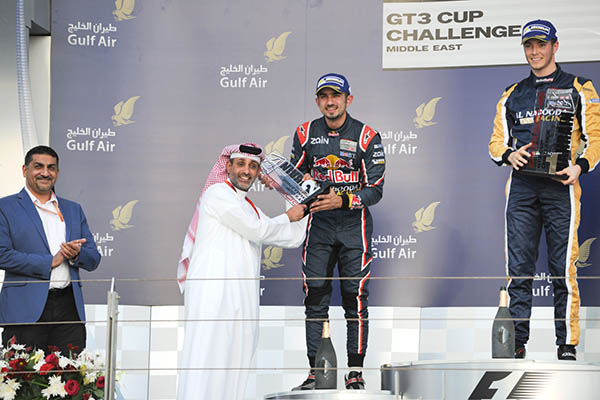 JEFFREY Schmidt and Pepe Oriola triumphed yesterday in their respective series, held as part of the 2016 Formula One Gulf Air Bahrain Grand Prix.

Schmidt showed why he was crowned the new champion last season in the Porsche GT3 Cup Challenge Middle East after winning his first support race yesterday.

Schmidt took the chequered flag in a total race time of 20:54.518. He was 5.745s ahead of runner-up and teammate Zaid Ashkanani, while Dennis Olsen claimed the final podium step after completing the race 11.265s back.

Ashkanani had earlier won pole position for the race with a best lap of 2:04.485 during qualifying.

All three were also the first three in the gold category.

In the TCR International Series, Oriola claimed a season-opening victory after steering his Seat Leon to the chequered flag in 22:25.883.

Ex-Formula One driver Gianni Morbidelli in a Honda Civic was runner-up 2.372s back, while James Nash, also in a Seat Leon, took the final podium place 3.219s adrift.

Race two is scheduled for today at 2.30pm.

Meanwhile, two hundred valuable prizes will be up for grabs for race fans seated along Bahrain International Circuit’s (BIC) Main Grandstand shortly prior and during today’s Bahrain Grand Prix.

For the third successive year, BIC is holding its hugely popular “10 Every 10” raffle, wherein10 fantastic prizes will be given out every 10 minutes from4.45pm until the end of the 57-lap night race.

The raffle is exclusively for those seated along the Main Grandstand. Winners will be announced from 4.45pm onwards, so fans are advised to hurry and get to their seats even before the 6pm start of the Bahrain Grand Prix.

Winners will be identified by their seat numbers; therefore, they must be in their seat in order to claim their prize. Don’t miss out on this opportunity and make sure you are seated for the duration of the raffle.