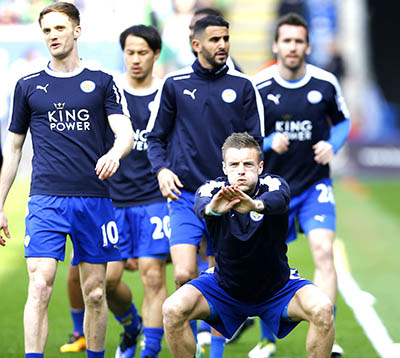 All three clubs have strongly denied the allegations.

“Leicester City Football Club is extremely disappointed that The Sunday Times has published unsubstantiated allegations referring to players from clubs including Leicester City when, on its own admission, it has insufficient evidence to support the claims,” the East Midlands side said in a statement.

Chelsea were equally vehement, saying: “Chelsea Football Club has never used the services of Dr Bonar and has no knowledge or record of any of our players having been treated by him or using his services.”

Fellow London club Arsenal also issued a strident statement, slamming “false claims without foundation” and adding: “We strictly adhere to all guidelines set by the World Anti-Doping Agency and our first-team players participate in approximately 50 random drugs tests during each football season.

“None of our players has ever failed such a test.”

The Sunday Times, which has been at the heart of several doping exposes involving international athletics over the last 12 months, conducted an undercover operation on anti-ageing doctor Bonar.

The 38-year-old medic claims to have had a network of “secret clients”.

The broadsheet said Bonar named athletes from several different sports. Those contacted – but not named – by the paper either denied being treated by him or declined to comment.

The newspaper was quick to add they had no independent evidence that he treated the unnamed players.

“In the past six years he has treated more than 150 sports people from the UK and abroad variously with banned substances such as erythropoietin (EPO), steroids and human growth hormone, and the sports performance improvements were phenomenal,” the report said.

In the newspaper’s footage, Bonar is filmed saying: “Some of these treatments I use are banned on the professional circuit. It’s how you do it,” he said, adding: “You want to do it off-cycle or between races.”