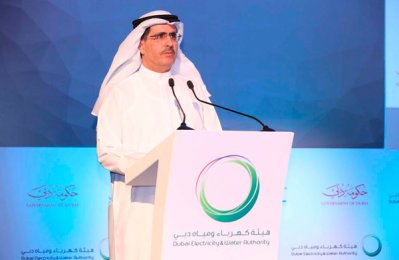 Dubai Electricity and Water Authority (Dewa) is organising a three-day workshop on the effect of soiling on photovoltaic (PV) modules, in co-operation with the United States Department of Energy’s National Renewable Energy Laboratory (NREL).
PV experts from research, academic, and government organisations participated in the workshop being held at the Address Dubai Mall hotel.
The workshop exchanges expertise and best international practices in combating the effect of soiling on PV modules and their performance.
It is also discussing PV module maintenance and operation, studies that should be conducted, and solutions to face this issue. These include installing sensors and special devices to measure dust volume, regular cleaning of the panels, and using special coating that protect the panels from dust.
The workshop also reviews dust movement, specifications of dust particles, ways to mitigate their effect, experiences from different countries around the world, and characteristics of the region’s climate.
Saeed Mohammed Al Tayer, managing director and chief executive officer, said: “Dewa gives priority to Research and Development (R&D), sustainability, renewable energy, and photovoltaic technology. This supports the National Innovation Strategy, launched by His Highness Sheikh Mohammed bin Rashid Al Maktoum, Vice President and Prime Minister of the UAE, and Ruler of Dubai, to make the UAE one of the most innovative countries in the world.
“The Mohammed bin Rashid Al Maktoum Solar Park plays host to many of the major projects in this field, such as the interactive innovation centre, equipped with the latest technologies in clean and renewable energy, enhancing the capabilities of national renewable and sustainable energy.
"Dewa’s Innovation Centre features a group of R&D centres that specialise in clean energy technologies, drone research, and solar energy based desalination, worth a total investment of Dh500 million ($136 million). This supports DEWA’s innovation strategy, which is a major pillar and government value. Dewa adopts an integrated strategy to stimulate research in renewable energy and water and implement creative ideas and suggestions."
“Dewa Innovation Centre at the Mohammed bin Rashid Al Maktoum Solar Park includes a number of clean energy R&D laboratories. DEWA gives priority to R&D, innovation, R&D operations, and solar testing, to enhance the abilities of PV modules, and reduce the risks faced by photovoltaic modules due to harsh environmental conditions," said Al Tayer.
"The centre develops techniques that can improve the performance of PV units according to climate conditions in the region. The solar testing centre studies, evaluates, and tests the long-term stability and reliability of 30 types of PV panels, using the most sophisticated and accurate equipment," he said.
"The highest standards and techniques of testing, controlling, monitoring, evaluation and reporting are applied. The centre also tests solar cell and PV panel technologies and manufacturing in terms of protection, flexibility, and other specifications to cope with different weather conditions and the surrounding environment, in both open spaces, and when integrated into buildings” he added.
The main tasks of the solar testing facility include: dust impact and mitigation models, understanding physical and chemical properties of local dust and surfaces, field tests for novel approaches, the effects of soiling on PV cells, endurance tests, energy analysis to discover field defects, reliability and quality models, field failure or degradation prediction correlation with current accelerated tests, development of novel accelerated tests customised for Dubai’s climate, and technological assessment of performance.
“DEWA is diversifying its energy mix to include clean and renewable energy. DEWA launched the Shams Dubai initiative as part of its efforts to support the Smart Dubai initiative, launched by His Highness Sheikh Mohammed bin Rashid Al Maktoum, Vice President and Prime Minister of the UAE and Ruler of Dubai, to transform Dubai into the smartest city in the world, said Al Tayer.
"The main drivers for the initiative are to encourage the use of renewable energy in Dubai by educating and introducing customers to it. Dewa has a well-defined strategy, and an ambitious vision, to support the development and establishment of sustainable energy projects in Dubai," he said.
"DEWA has increased the targets for renewable energy to seven per cent of Dubai’s total power output by 2020 and 25% by 2030. Dewa aims to install PV panels on government buildings and schools, to produce clean energy locally, reduce electricity costs, contribute to the preservation of the environment, and guarantee a sustainable future for the Emirate,” noted Al Tayer.
“This workshop will have an effective role in supporting these efforts, via the exchange of skills between Dewa’s R&D centre, and some of the world’s key players in the industry who specialise in managing the effect of soiling on photovoltaic technology. The effect of soiling is the biggest challenge faced by photovoltaic projects locally, and throughout the region. DEWA aspires to have a leading role in tackling this issue in cooperation with some of the best research organisations,” he concluded. - TradeArabia News Service