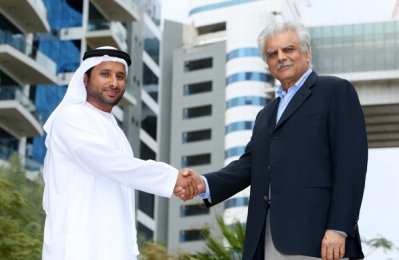 English hospitality brand Dukes is bringing the best of Indian fine dining to the stellar line-up of restaurants at its upcoming property on Palm Jumeriah in Dubai.

Khyber at Dukes Dubai was officially announced at a signing between Abdulla Bin Sulayem, CEO, Seven Tides International and Sudheer Bahl, Owner of Khyber, which took place at Dukes Dubai last week. The partnership marks the dining concept’s first franchise outside of India.

“We are thrilled to be bringing Khyber to Dubai for the first time and are positive that its blend of traditional, high-end cuisine served in an virbant atmosphere will make a stand out addition to the emirate’s dining scene,” said Sulayem. “We are working closely with the Khyber family to ensure the new restaurant captures the true essence of the concept and look forward to welcoming guests for dinner when the hotel opens later this year.”

Direct from Mumbai, Khyber at Dukes Dubai will specialise in traditional northern Indian cuisine that is best described as Ambrosia – the food of all the gods. It will be carefully crafted by an experienced Indian head chef and the venue will boast the ethnic style of the flagship Khyber restaurant, located in the arts and heritage disctrict of the capital.

“Khyber has been the family business for more than 60 years and we have experienced tremendous success thanks to our unrivalled take on northern Indian cuisine,” added Bahl. “Entering the UAE for the first time is an important step for us in terms of international growth and, with the help and guidance of Seven Tides, we are sure to make it a big success.”

Khyber at Dukes Dubai will be located on the 15th floor of the hotel where guests can enjoy a 180-degree view that takes in Burj Al Arab and the Dubai Marina skyline. The venue will have capacity for up to 210 guests, including up to 60 diners on the terrace.

“We will be putting our stamp on popular dishes such as Tandoori Raan, a tender leg of baby lamb marinated with spices and cooked in a clay oven, and Milky Way, a galaxy of saffron pearls on a bed of condensed sweetened milk,” said Martin Cahill, executive chef at Dukes Dubai, who will be overseeing the culinary operations. “There will be a selection of vegetarian and non-vegetarian dishes available to delight even the most discerning palettes of Indian fine dining enthusiasts.”

Established in 1958, Khyber Mumbai has risen to international acclaim thanks to its delicious, premium quality cuisine. What started as a 50 cover restaurant now has capacity for up to 300 diners and the eatery counts high profile guests including Sir Paul McCartney, Richard Gere, Demi Moore, Aamir Khan and the Kuwait Royal Family among its fans. It has racked up a number of prestigious awards in its time, including the ‘Best Fine Dining Restaurants – India #6 in the Tripadvisor Travellers’ Choice Awards 2015; the I Ate Here Awards, Best Kebabs, Mumbai by Mouthshut.com in 2014-2015; and the User’s Choice ‘Legendary’ by the Connoisseur’s Guide to Eating Out, Zomato in 2013.

Centrally located on the trunk of Palm Jumeirah, just 10 minutes’ drive from Dubai Marina and Sheikh Zayed Road, and only 45 minutes from Dubai International Airport, Dukes Dubai hotel and hotel apartments is set to add a distinctly British flavour to the city’s luxury hospitality offering.

The 279 guestrooms and 227 hotel apartments will offer world-class leisure, conference and entertainment facilities including a stunning private beach, indoor pool, outdoor infinity pool and state-of-the-art gym, along with a number of food and beverage outlets. - TradeArabia News Service