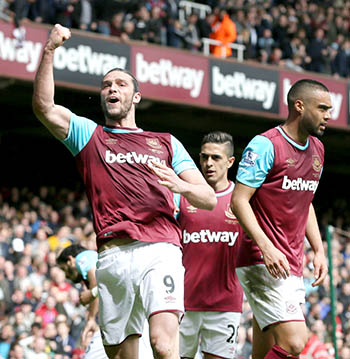 London: Arsenal’s title hopes were virtually extinguished in a 3-3 draw at West Ham United and Aston Villa’s top-flight status is merely mathematical after an eighth successive defeat all but sealed their fate yesterday.

Needing a storming finish to the Premier League season and a Leicester City wobble to have any chance of finishing top, Arsenal seemed on course for a third consecutive victory when they led 2-0 but the Gunners were rocked by Andy Carroll’s quickfire hat-trick.

Laurent Koscielny’s equaliser against the Hammers spared third-placed Arsenal a defeat in the last London derby at Upton Park but they remained 10 points adrift of Leicester with six games left.

“We have to keep going no matter what, and hope. You never know what can happen,” said manager Arsene Wenger although his priority now seems to be about sealing a 19th straight season in the Champions League by finishing in the top four.

The relegation trapdoor is not completely nailed down on bottom club Villa but after an eighth consecutive league defeat, 2-1 at home to Bournemouth, they can start making plans for life in the Championship.

Villa are marooned on 16 points with five games left and the most they can now attain is 31, the haul that fourth from bottom Norwich City have after they went down 1-0 at Crystal Palace. The former European champions also have a minus-41 goal difference compared to Norwich’s minus-22 so only a surreal set of circumstances can save them.

Newcastle still have a modicum of hope but it is fading fast after they lost 3-1 at Southampton to leave Rafa Benitez’s side second from bottom, six points behind Norwich and two adrift of Sunderland who host Leicester today.

Injury-hit Chelsea produced a lacklustre display as their 15-match unbeaten spell under Dutchman Hiddink ended in disappointing fashion in Wales.

Manchester City recovered from going behind early on to beat West Bromwich Albion 2-1.

Stephane Sessegnon gave West Brom the lead in the sixth minute with a powerful near-post finish. In the 19th, however, Sessegnon turned from hero to villain as he brought down Alexander Kolarov inside the penalty area, gifting Sergio Aguero a goal from a well-taken penalty kick.

The winner came in the 66th, Samir Nasri poking in from close range after a scramble in the penalty area.