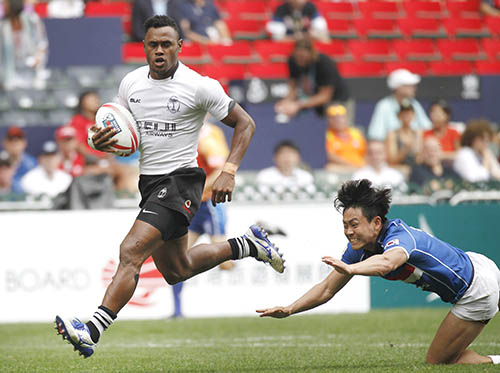 Rawaca scored a dazzling opener in Fiji’s 36-10 win over Wales and crossed again in the second half as the world series title-holders set up a quarter-final against Kenya.

New Zealand struggled to a 5-0 win over Kenya before hitting form with a 28-10 victory against Samoa, highlighted by Regan Ware’s double and All Blacks star Sonny Bill Williams’ first try of the tournament.

But England flagged after their upset win over South Africa on day one when they were pegged back 12-12 by Russia in their final game in Pool B.

Fiji coach Ben Ryan was encouraged after his team, who are bidding to win their country’s first ever Olympic gold in August, improved from Friday’s 19-17 scare against Canada.

“We’re still probably not absolutely firing, I think defensively we’ll go up a notch tomorrow. But after what was a very tough game last night it’s good to come through unscathed,” Ryan said.

The former England coach added that the form of Rawaca, who will join Saracens next season, underlined the quality now on show in the sevens world series.

“He’s hit form. We’ve given him hard work in training. He’s 108kg and that’s a lot of muscle to throw around for 14 minutes and we ask him to play for 14 minutes most of the time as well,” Ryan said.

“But he is playing well. He’s very hard to stop... Save will play World Cup 2019 for Fiji, he’ll stand out for Saracens.

“Gone are the days where these (sevens) guys are seen as junior rugby players – they’re world-class in their own right.”

Two-time Rugby World Cup-winner Williams, who is trying to cement an Olympics spot for New Zealand, burst between two Samoa defenders to break his duck in Hong Kong.

But Nick “Honey Badger” Cummins was sidelined with an ankle injury as Australia hammered Portugal but were then upset 22-17 by the United States.

New England Patriots Super Bowl winner Nate Ebner, another Olympic hopeful, stayed on the bench for the Americans after his exertions at this week’s Hong Kong 10s.

The lure of the Olympics has proved irresistible for Ebner and others as rugby makes its return to the Games in Rio de Janeiro after a 92-year gap.

Hong Kong’s format and sold-out, 40,000-seat stadium make it the closest thing the sevens world series has to the Olympics, making it a vital staging post on the road to Rio.

In today’s quarter-finals, Fiji will play Kenya, New Zealand face Wales, South Africa are against the USA and England are pitted against Australia.