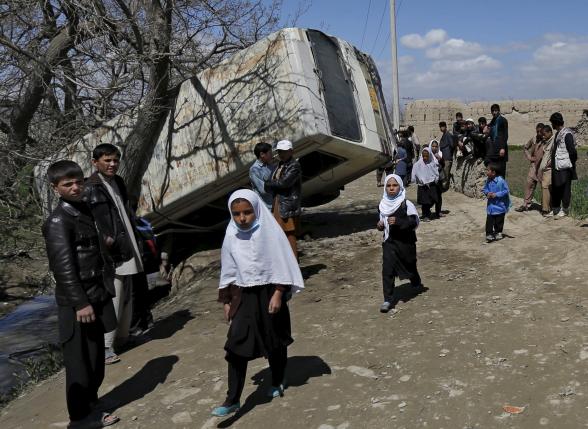 Schoolgirls walk past a damaged mini-bus after it was hit by a bomb blast in the Bagrami district of Kabul, Afghanistan April 11, 2016. (Reuters Photo)

The roadside bomb blew up as the bus was carrying workers to their offices in Kabul's eastern Bagrami district, the ministry said.

There was no immediate claim of responsibility. Government workers and members of the security forces are often targeted by insurgent groups, including the Taliban, who are seeking to topple the U.S.-backed government in Kabul.

Bus conductor Rahim Gul said the force of the blast threw him out of the vehicle.

"We picked up the Education Ministry staff and we were driving on the road when there was an explosion," Gul told Reuters Television.

"It was very powerful and threw me out of the car window. A few minutes later I found myself in a wheat field and then I rushed to the site of the attack and helped some injured people and they were taken to hospital."

The Taliban have stepped up their insurgency since most foreign troops withdrew from Afghanistan at the end of 2014, although Kabul has enjoyed a period of relative calm during the harsh winter months.

That lull was expected to end soon with the Taliban poised to launch their annual spring offensive.

Six people were killed by a suicide bomber on a motorcycle in Parwan district, northwest of Kabul, last week. On Feb. 22, a Taliban suicide bomber killed 14 people and wounded 11 at a clinic in the same district.

Afghanistan's precarious security was underlined late on Saturday when at least two rockets hit the diplomatic zone in Kabul only hours after U.S. Secretary of State John Kerry had held meetings with Afghan government leaders in the capital.

No injuries were reported.