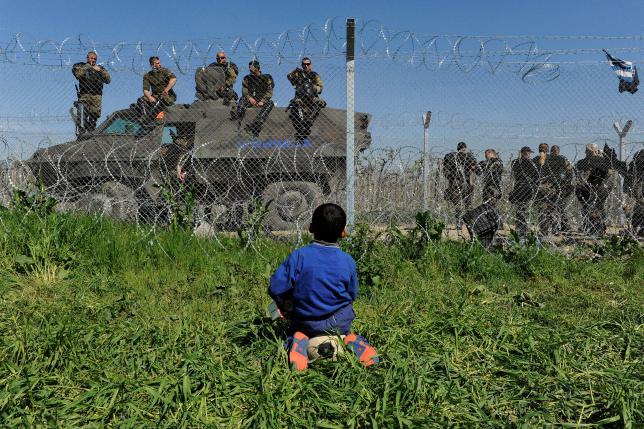 A boy sits on his ball next to a border fence on the Greek side of the border, as Macedonian police stand guard on the Macedonian side, close to a makeshift camp for refugees and migrants near the Greek village of Idomeni, April 12, 2016. (Reuters Photo)

Athens: Greece said authorities would start ruling on asylum applications from hundreds of migrants in the next two weeks, in a major test of a new deal to try and control the flow of people trying to reach Europe.

Asylum applications in Greece have been piling up since March, when the European Union and Turkey signed an agreement intended to close off the main route into Europe for over a million refugees and migrants since last year.

Under the deal, those who arrive to Greece from March 20 will be screened, registered and detained in holding centres until their asylum applications are processed. Rejected applicants, and those who do not apply, are returned to Turkey.

Amnesty International has called the situation in Greece "very chaotic," without enough attention for individual processing and has voiced concerns that the process will be a "rubberstamping exercise" to send people back.

So far, around 325 people who did not request asylum have been returned from the Greek islands under the accord, which the U.N. refugee agency (UNHCR) has condemned and rights advocates say may violate international law.

"The first results of the asylum applications will be ready in about 15 days and the next phase of the implementation of the agreement will begin," government spokeswoman Olga Gerovasili told a news briefing.

A spokesman for the European Asylum Office (EASO), a partner in implementing the deal, said the timeframe was "feasible". EASO officials have been deployed on the island of Lesbos since last week carrying out "admissibility assessments" of arrivals.