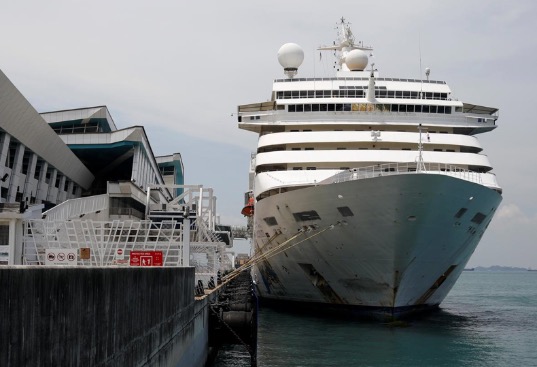 View of Star Cruise's Superstar Gemini, which is currently being accessed for use as temporary accommodation for migrant workers, berthed at Marina Bay Cruise Center, Singapore, April 17, 2020. REUTERS/Edgar Su

SINGAPORE - Singapore is assessing whether migrant workers who have recovered from coronavirus might be safer on cruise ships than back in dormitories that have become infection hotbeds, despite problems controlling onboard outbreaks encountered elsewhere.

The city-state has seen virus cases surge in sprawling housing complexes for foreign laborers, recording its biggest ever jump in cases on Thursday, and is looking for new accommodation solutions for hundreds of workers.

Around 60% of the 4,427 people infected on the island stay in dormitories, where mainly South Asian laborers live 12 to 20 in a room, and share toilets in conditions some workers have said are unsanitary.

“Cruise ships are being considered as they have readily available rooms and en-suite toilets to minimize person-to-person contact,” the city-state’s tourism board said in an e-mailed statement on Friday.

It said the measure could be rolled out for workers who have recovered from the coronavirus and tested negative, helping free up space in dormitories. Authorities are also moving some healthy workers from dorms into public housing, military camps and industrial ships used to accommodate offshore staff.

People rarely catch infectious diseases twice as they develop some immunity, medical experts say, though there have been isolated reports of such cases since the pandemic began in China in December.

Two ships owned by Genting Cruise Lines, that could each accommodate up to 2,000 people, were being checked to see if they had suitable ventilation systems, security protocols and infection control measures, the tourism board said.

Cruise ships have also been at the center of mass outbreaks during the coronavirus pandemic which has claimed over 130,000 lives and infected over two million people globally.

One of the most notable incidents involved the Diamond Princess which was quarantined for nearly a month in Japan, with eventually more than 700 people becoming infected.