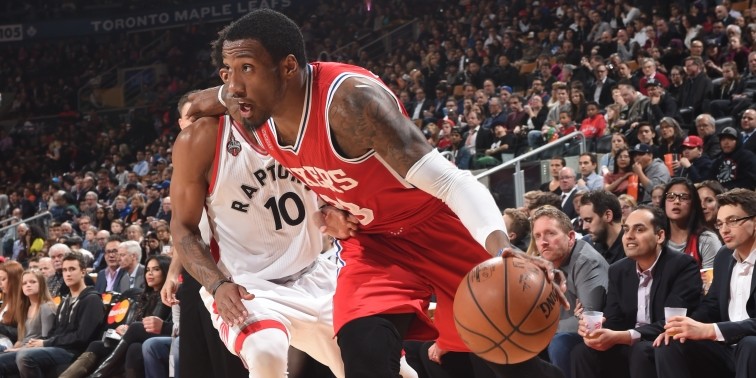 Kyle Lowry #7 of the Toronto Raptors ;htb ;against the Philadelphia 76ers on April 12, 2016 at the Air Canada Centre in Toronto, Ontario, Canada. (NBA Photo)

Joe Johnson scored 15 of his game-high 25 points in the fourth quarter and the Miami Heat moved into a tie for third place in the Eastern Conference by downing the Detroit Pistons 99-93 Tuesday.

The Heat and the Atlanta Hawks are both 48-33, and the Boston Celtics and Charlotte Hornets are both 47-34 as the four teams fight for the third through sixth seeds in the East playoffs. Miami would be assured of home-court advantage in the first round of the playoffs if its wins its regular-season finale Wednesday at Boston.

Indiana overcame New York's 36-point first quarter and defeated the Knicks behind 19 points each from Paul George and George Hill.

Jonas Valanciunas had 17 points and 11 rebounds, and each Toronto starter scored in double figures as the Raptors defeated Philadelphia.

All told, seven Raptors hit double digits on the score sheet as Toronto beat Philadelphia for the 12th straight time by taking control of the game in the third quarter.