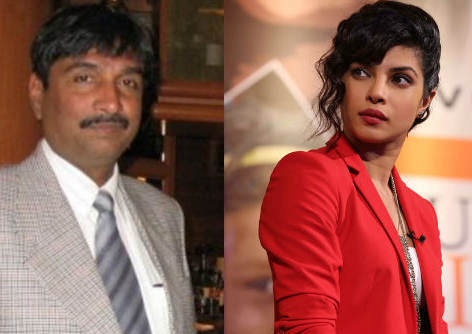 Actress Priyanka Chopra says her ex-manager Prakash Jaju should not have been given attention by the media as his statements were not authentic.

New Delhi: Breaking her silence on former manager Prakash Jaju's claims on her alleged suicide attempts, actress Priyanka Chopra says he should not have been given attention by the media as his statements were not authentic.

In a series of tweets earlier this month, Jaju had said the 33-year-old 'Quantico' star tried to commit suicide thrice during her struggling days, including in 2002 after the death of her alleged former boyfriend Aseem Merchant's mother.

"This is utter... First of all, it's so sad that Indian media has given credibility to the man, who was in jail because of harassing me, without checking the history of who the person is. So, I have nothing to say because there is no credibility to this person, who media is giving credibility to," she told PTI.

Things between the 'Bajirao Mastani' star and Jaju turned sour when she terminated his services in 2004.

Later, he even filed a criminal suit against her, accusing her of not having cleared his dues.

Jaju, however, ended up serving 67 days in jail after Priyanka's father, Ashok Chopra filed a complaint against him for interfering in his daughter's privacy.

His tweets came days after popular TV actress Pratyusha Banerjee was found dead at her home. The police suspected she committed suicide due to stress over her relationship with boyfriend Rahul Raj Singh.

Pratyusha's demise re-opened the ever ongoing debate on whether people in showbiz are more prone to depression.

Priyanka, however, finds it disappointing that the finger has been pointed at the entertainment industry.

Priyanka condemned those who are talking ill about the actress without even finding out the actual truth.

"Nobody knows the truth. Nobody ever tried to find out what the poor 24-year-old girl was going through... And as usual, people are dissecting her life. People are unnecessarily talking about her, not giving her and family the respect they deserve right now."

The 'Jai Gangaajal' star said that youth should not end their own lives and rather teach people who bother them a lesson.

"Young people are also committing suicide in colleges and hostels. I believe why they have to kill themselves for somebody else. I would kill that person first before ending my life for the person.