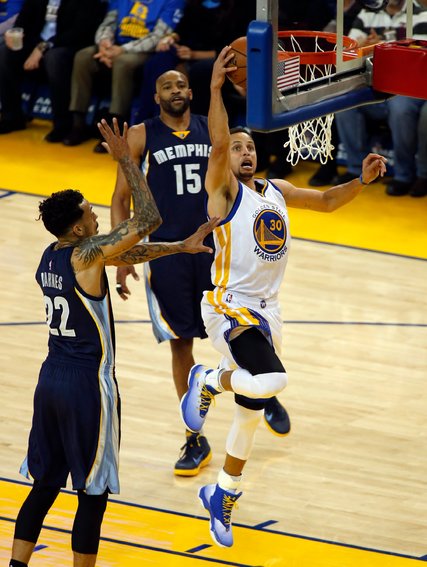 Stephen Curry shooting a layup against the Memphis Grizzlies during the first half. Curry made 10 3-pointers, giving him 402 for the season. (NY Times Photo)

The Golden State Warriors set an NBA record with their 73rd regular-season win, riding Stephen Curry's 46 points to a 125-104 victory over the Memphis Grizzlies.

Tuning up for a first-round matchup with the eighth-seeded Houston Rockets in the Western Conference playoffs, the Warriors (73-9) surpassed the 72-win total of the 1995-96 Chicago Bulls, a mark Golden State equalled Sunday in San Antonio.

The Warriors, who dispatched the Rockets in five games in the Western Conference finals last year en route to their first NBA title since 1975, swept the three-game series from Houston this season.

Bryant, who had 23 points in the final quarter, finished shooting 22-of-50 from the floor and six of 21 from 3-point range.

Jordan Clarkson chipped in 12 points for the Lakers and was the only Los Angeles player to reach double figures other than Bryant.

Trey Lyles had 18 points and 11 rebounds to lead the Jazz, who lost their bid for a postseason berth before tip-off when the Houston Rockets claimed a win over the Sacramento Kings for the final seed in the Western Conference.

James Harden capped a marvelous statistical season and the Houston Rockets claimed the final playoff berth in the Western Conference with a 116-81 win over the Sacramento Kings.

Harden finished with 38 points and joined Oscar Robertson, Michael Jordan and LeBron James as the only players to average 29 points, six rebounds and seven assists in a season.

The Rockets (41-41) closed the regular season with three consecutive victories.

In the final game of the season for both teams, the Minnesota Timberwolves routed the visiting New Orleans Pelicans.

The Timberwolves played the season finale amid reports that interim head coach Sam Mitchell likely won't return as coach next year. Despite that, Minnesota tallied a season high in points, topping their previous high of 132.

Timberwolves rookie Karl-Anthony Towns, the apparent front-runner for the NBA's Rookie of the Year award, had 28 points -- 20 in the first half -- and 14 rebounds to lead the way for Minnesota.

Solomon Hill scored 22 points as the Indiana Pacers wrapped up the regular season with a 97-92 victory over the Milwaukee Bucks.

Hill was one of four Indiana players to score in double figures. Lavoy Allen added 14, Rodney Stuckey scored 12 and Glenn Robison III had 14 off the bench for the Pacers.

Rookie Norman Powell scored a career-high 30 points as the Toronto Raptors concluded the best regular-season in team history by rallying from an early deficit for a 103-96 victory over the Brooklyn Nets.

Powell, who has thrived with increased playing time in recent weeks, shot 12-of-18 from the field and made eight straight attempts at one point. He set career highs for field goals, 3-pointers (5) and rebounds (9) while playing 36 minutes.

Al Jefferson scored 26 points and the Charlotte Hornets held off a second-half rally to beat the Orlando Magic 117-103 in their regular-season finale.

Five other players finished in double figures for the playoff-bound Hornets (48-34), who blew a 22-point lead in the second half but hung on and will be the Eastern Conference's No. 6 seed.

Coming off double-digit losses in the past two games, the Boston Celtics talked about playing with more aggression in their regular-season finale against the Miami Heat with Eastern Conference playoff seeding on the line.

Guard Isaiah Thomas' 21 points led five Boston players in double digits and the Celtics outscored the Heat 60-26 in the second half to overcome a 26-point deficit and prevail 98-88.

Jodie Meeks scored 20 points off the bench, and the Detroit Pistons beat the Cleveland Cavaliers 112-110 in overtime Wednesday, when both teams sat nearly all of their starters.

The two teams will meet again this weekend in the first round of the playoffs, so with nothing to play for, both sides cleared the bench.

Meeks played 26 minutes Wednesday after logging 11 all year. He scored just two points this season prior to Wednesday.

Jordan McRae scored a career-high 36 points in a career-high 47 minutes for the Cavaliers but missed two of three crucial free throws in the final second with a chance to tie the game.

Someone forgot to tell his Spurs.

A ragtag version of the Spurs rallied from 18 points down to beat the Mavericks.

With six of the main Spurs left behind in San Antonio, little-used reserves such as center Boban Marjanovic and guard Jonathan Simmons led an unlikely comeback against a Dallas squad largely intact.

The loss meant the Mavericks (42-40) couldn't finish any higher than the sixth playoff seed in the Western Conference. Dallas came into the game with an outside shot of moving up to fifth, but needed to beat the Spurs.

The Mavericks, the No. 6 seed, will open the postseason at Oklahoma City.

The Washington Wizards, despite a rumor-filled day and playing without four starters, defeated the full-strength Atlanta Hawks in the regular season finale for both teams.

Al Horford had 19 points for the Hawks (48-34), who needed at least a win for a chance at finishing third in the Eastern Conference.

Atlanta enters the postseason with home court advantage in the opening round as the fourth seed and will face the fifth-seeded Boston Celtics. Boston defeated the Miami Heat, which finished as the No. 3 seed.

Nikola Mirotic scored a game-high 32 points and the Chicago Bulls rallied for a win over the Philadelphia 76ers.

Chicago (42-40) secured its sixth consecutive winning season but missed the postseason for the first time since 2007-08.

Mirza Teletovic led seven players in double figures with 22 points as the Phoenix Suns closed out a disappointing season with a 114-105 win against the Los Angeles Clippers.

Jon Leuer had 16 points and 14 rebounds and Alan Williams added 14 points and 12 rebounds for the Suns, who finished with a 23-59 record, the second-worst record in the franchise's 48-year history. Phoenix won three of its final four games.

Teletovic had two 3-pointers Wednesday and finished with 179 for the season, a new NBA record for 3-pointers by a reserve.

Damian Lillard scored 21 points in 24 minutes to lead the Portland Trail Blazers past the Denver Nuggets 107-99 in the regular-season finale for both teams.

CJ McCollum added 17 points and Allen Crabbe came off the bench for 16 for the Trail Blazers (44-38), who secured the No. 5 seed in the Western Conference playoffs.