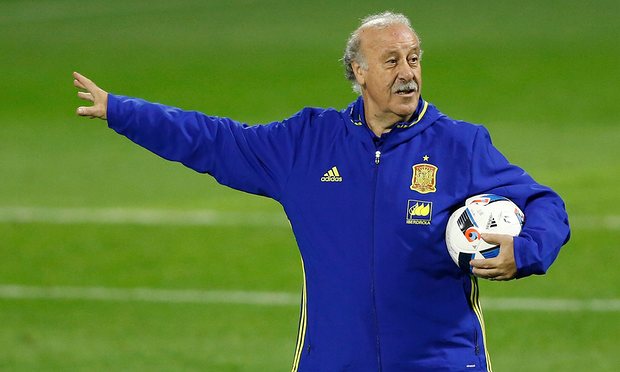 Vicente del Bosque had dismissed any security concerns saying he was not afraid of the game being played. (Reuters Photo)

Madrid: Spain coach Vicente del Bosque said on Thursday that Barcelona's elimination from the Champions League could help his team's preparation for the European championship.

The holders' elimination at the hands of Atletico Madrid on Wednesday means Gerard Pique, Jordi Alba, Andres Iniesta, Sergio Busquets and Sergi Roberto will be able to link up with the Spain team earlier than if they had reached the Champions League final on 28 May.

Spain should also benefit from the fact that Barca, the team with the most players in the Spain squad, will play three fewer games during the intense finale of the season.

"These players are used to exerting themselves in the top competitions so it (Barca reaching the final) wouldn't necessarily have been a setback but now they will arrive earlier and will have more time off and that's a bit better for us," Del Bosque told reporters.

Spain could also have two teams in the semi-finals of the Europa League, with Villarreal 2-1 up against Sparta Prague from their quarter-final first leg, and Sevilla hosting Athletic Bilbao in the second leg of an all-Spanish tie.

Del Bosque celebrated Spain's dominance of European competition, adding: "The fact that two Spanish teams are in the semi-finals is a big deal for us. We have the sensation of hegemony of Spanish football in Europe, not just this year but in the last few years.

"Madrid showed their authority and barely conceded any chances," he said of Real's 3-0 win over Vfl Wolfsburg that put them through 3-2 on aggregate.

"Barcelona were a notch below what we've seen but more than their defects we should focus on Atletico's virtues; they were able to utilise Barca's play and attacked them intelligently in the first half."

"Man City have been trying to get to the semis of the Champions League for a long time, they have a lot of physical capacity, are uncomfortable for any rival, and have great players, Yaya Toure, David Silva, Sergio Aguero and the Kevin de Bruyne," Del Bosque added.

"They have good defenders are will be a dangerous team to face. Bayern have confirmed the work of Pep Guardiola and they have an excellent team so the semi-finals will be fantastic for spectators."