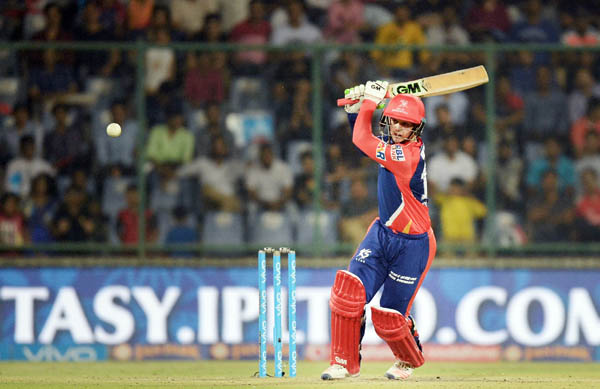 De Kock remained unbeaten on 59 off 42 balls, hitting a six and nine fours as Delhi chased down the meagre 112-run target with eight wickets and 39 balls to spare. Pawan Negi, 8 not out off 2 balls, smacked a massive six over the deep mid-wicket to finish the chase in style. Delhi registered their first win of the season with the victory, while Punjab suffered their second successive defeats in as many games.

The target of 112 was always going to be a below par to defend for the visitors, but they started positively by taking the wicket of the Shreyas Iyer (3) early in the third over. Sandeep Sharma gave the breakthrough but they had to wait for more than ten overs to get the second as De Kock along with Samson took the game away with a brilliant second-wicket partnership.

Samson was eventually clean bowled by spinner Axar Patel, 1 for 25, in the 13th over but Delhi had comfortably reached 100 by then, needing just 12 more in more than seven overs. Samson scored a watchful 33 off 32 balls, hitting three fours and a six.

Electing to bowl, Delhi began their home campaign on the right note as their bowlers led by Amit Mishra restricted Kings XI Punjab to 111/9.

Legspinner Mishra finished his fruitful day with four wickets for 11 runs in three overs, while for Punjab Manan Vohra was the top scorer with 32 off 24 balls, which included five boundaries. Interestingly Mishra didn’t get the chance to finish his quota. Delhi skipper Zaheer Khan too bowled brilliantly to finish one for 14 runs in four overs which included a maiden.