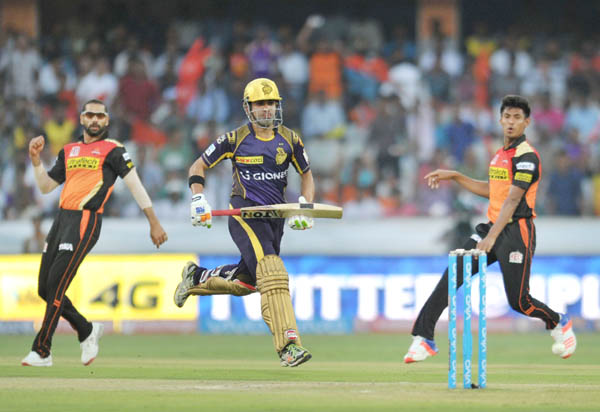 Skipper Gambhir continued his purple patch with the bat as he took his side home with 10 balls left, scoring an unbeaten 90 off 60 balls which included a six and 13 fours.

KKR came back strongly from their defeat against Mumbai Indians, by six wickets, in their previous match to seal their second win of the season in three games and jumped to second in the points table.

Hyderabad suffered their second successive defeat in as many games to remain glued at the bottom of the standings early in the season.

Chasing a modest 143-run target, Gambhir started the KKR innings steadily with Uthappa (38), almost sneaking a boundary every over to take the team to 36 for no loss after the first six Powerplay overs.

Then they reached 50 without any problem in the eighth over and made it 72 without loss in 10 overs, before Gambhir increased the momentum.

Gambhir smacked three back-to-back fours off spinner Karn Sharma to score 14 runs in the 11th over, best in the KKR innings.

Earlier, Umesh Yadav started the bowling attack with Morne Morkel for Kolkata and established an upper hand in the first half of the Hyderabad innings, before Eoin Morgan and Naman Ojha stitched a 67-run stand to take the score to 142-7 in 20 overs.