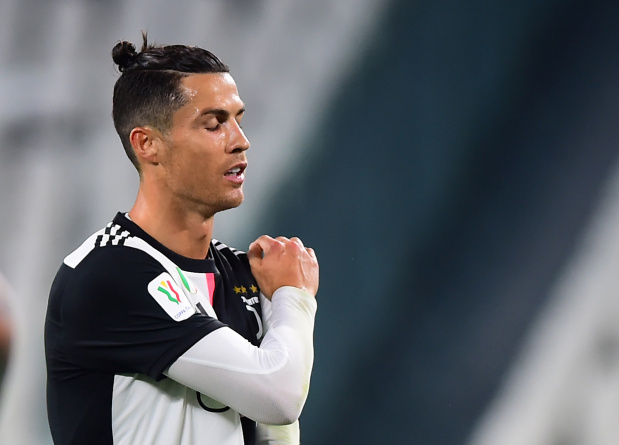 TURIN: Cristiano Ronaldo missed a penalty as Juventus were held to a 0-0 draw by 10-man AC Milan last night but the Turin side still squeezed into the Coppa Italia final as the season restarted following a three-month stoppage for the novel coronavirus.

Juve qualified for Wednesday’s final on away goals following their 1-1 draw in the first leg of the semi-final, played on February 13, and face Napoli or Inter Milan who meet today.

The two key moments happened within six seconds of each other early in the match played behind closed doors at the Allianz stadium.

Juventus were awarded a penalty in the 16th minute after the VAR officials spotted the ball hitting Andrea Conti’s elbow but Ronaldo slammed his effort against the foot of the post.

Milan cleared the ball upfield but, as they did so, forward Ante Rebic aimed a wild kick at Danilo and was sent off, forcing the visitors to play for more than 70 minutes with 10 men.

Milan, missing veteran forward Zlatan Ibrahimovic with a calf injury, held out well but rarely threatened to snatch the goal that would have taken them into the final.

They caused Juve only one real fright when Hakan Calhanoglu was close with a diving header early in the second half.

“After 90 days, we were playing again in an empty stadium and it was strange at the start.”

Meanwhile, Getafe’s Champions League qualifying hopes took a knock as they resumed their La Liga campaign after a three-month hiatus with a 2-1 defeat behind closed doors at Granada yesterday.

David Timor’s first-half opener was cancelled out in the second half by Djene’s own goal following a blunder by goalkeeper David Soria, whose hands were again shaky as Carlos Fernandez struck the winner with 11 minutes left.

The result left Getafe in fifth place on 46 points from 28 games, level on points with fourth-placed Real Sociedad who play their game in hand at home to Osasuna on Sunday.

Granada moved up a place to eighth on 41 points.

At Bundesliga, third-placed RB Leipzig scored two quickfire goals through Dani Olmo immediately after Hoffenheim had a penalty award overturned by VAR in a remarkable opening 12 minutes on the way to a 2-0 win on the road last night.

The victory gave Leipzig coach Julian Nagelsmann a happy first return to the club where he began his coaching career as a 28-year-old and ensured an unhappy start for Hoffenheim’s unorthodox five-man coaching team who replaced Alfred Schreuder after his sacking on Tuesday.

After a bright start, seventh-placed Hoffenheim were awarded a penalty when Munas Dabbur was upended by Leipzig goalkeeper Peter Gulacsi in the sixth minute.

The ball was on the spot and Dabbur was waiting to take the spot kick when it was revoked for handball after a VAR review which took nearly two minutes.

Leipzig then delivered two knockout blows when Olmo finished off a counter-attack by sidefooting the visitors ahead in the ninth minute and the Spaniard struck again two minutes later from a similar position.

Dabbur headed against the bar and Gulacsi made a superb block from Christoph Baumgartner as valiant Hoffenheim kept pushing forward, while Leipzig forward Timo Werner was put clean through but side-footed over just before halftime.

Olmo missed the chance of a hat-trick when he sidefooted wide in the 65th minute and Christopher Nkunku rattled the post as Leipzig missed a flurry of chances in the second half.