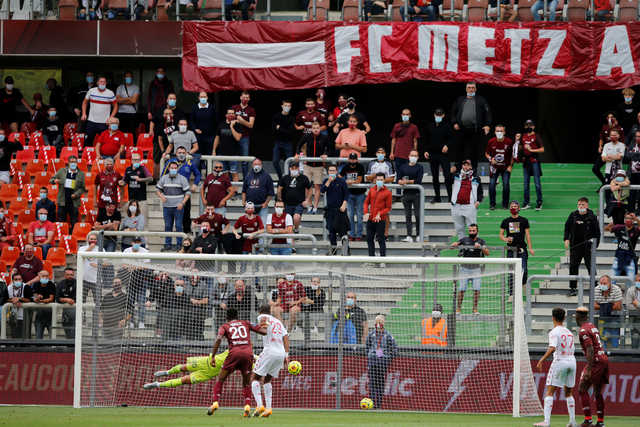 PARIS: Monaco won 1-0 at Metz despite going down to 10 men early in the second half, with Benoit Badiashile scoring the winner emphatically from a set piece in their Ligue 1 clash at the Stade Saint-Symphorien yesterday.

Badiashile pounced on a loose ball in the box from a free kick in the first half to volley home the winner and Monaco held on despite having Youssouf Fofana sent off in the first minute of the second half for a second bookable offence.

Nantes were reduced to nine men as they beat Nimes 2-1 with two first-half goals but their defence was severely tested when goalscorer Imran Louza was shown a straight red in the 47th minute. Their left back Fabio was then also dismissed late on for a second yellow card offence.

Meanwhile, Lille came away from Reims with a 1-0 win when winger Jonathan Bamba let fly with a strike from the edge of the box that beat goalkeeper Predrag Rajkovic and crept in at the near post.

Olympique Marseille striker Florian Thauvin scored a first goal in more than a year and set up two others to help his side to a winning start in their 2020-21 Ligue 1 season with a 3-2 success at Brest.

Nice remain top of the standings with two wins from two while defending champions Paris St Germain are yet to start their campaign after losing the Champions League final last weekend.