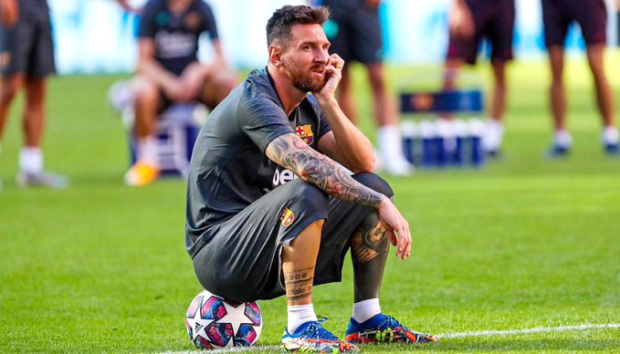 BARCELONA: La Liga yesterday released a statement saying Lionel Messi’s Barcelona contract was still valid, days after his shock announcement that he wants to leave the club and hours after he failed to attend a pre-season medical.

Messi’s failure to show for his medical underlined the 33-year-old’s determination to leave the club he has been with throughout his career.

The six-times world player of the year insists he has a clause in his contract that allows him to leave on a free transfer – a claim disputed by Barcelona and now by La Liga.

The ruling body said the only way a club can sign the Argentine forward is if he triggers a release clause of 700-million euros ($833m).

“In compliance with the applicable rule, La Liga will not approve a request to be de-registered as a player with the Spanish football federation, unless the amount in the release clause has been paid,” La Liga said.

Reuters footage showed players arriving for coronavirus tests yesterday morning and Messi did not appear. He had been due at Barcelona’s training ground at 10.15am local time but a club source confirmed he had not arrived.

La Liga’s stance is a blow to Messi’s hopes of a quick departure and to those clubs wishing to sign him.

Premier League Manchester City are the favourites which would allow Messi to link up with his former Barcelona coach Pep Guardiola but even the Abu Dhabi-owned club might find a 700m-euro fee, plus Messi’s huge salary, a deal-breaker.

Messi, who has won more than 30 major trophies with the Spanish club and scored more than 600 goals, earns around one million euros per week. He informed Barca on Tuesday he wished to leave immediately, plunging the club into new turmoil less than two weeks after their humiliating 8-2 Champions League quarter-final defeat by Bayern Munich.

Messi’s lawyers plan to invoke a clause in his four-year contract, signed in 2017, which would have allowed the forward to leave the club for free if he had requested it by June 10.

They will argue that that date – nominally the end of the season – is now irrelevant after the coronavirus pandemic forced an extension of the La Liga season deep into August.

Messi’s adoring fans at Barcelona were split over his apparent determination to force a move.

“A captain cannot abandon ship if it is sinking, but there isn’t much time left until the end of his career and he has the right to choose what he wants,” Eva Domingo, 39, said as she took a photo of graffiti depicting Messi as Argentine revolutionary Che Guevara pulling along a suitcase saying Manchester.

“I think he should sit down and talk if he wants to go, he should pay 700 million, and if not, then one more year here,” said Pablo Garcia, wearing an FC Barcelona face mask.