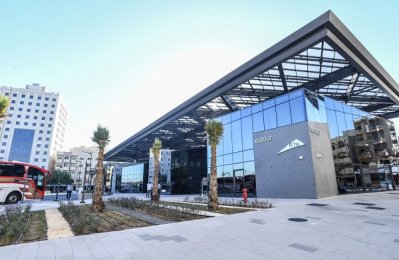 Dubai has announced the opening of a set of new generation public bus stations in Al Ghubaiba area of the emirate.
A masterpiece of modern engineering design, these bus stations are integrated with multi mass transit means including the metro, marine transport and taxis, said a statement from Roads and Transport Authority (RTA).
The Al Ghubaiba Bus Station, which spans a 2,452 sq m area, hosts office spaces, customer service areas, retail outlets and restaurants in addition to 50 slots for buses and 48 slots for vehicles.
It was inaugurated by Sheikh Hamdan bin Mohammed bin Rashid Al Maktoum, Crown Prince of Dubai and Chairman of Dubai Executive Council in the presence of Mattar Mohammed Al Tayer, Director General and Chairman of the Board of Executive Directors of RTA and other officials.
Sheikh Hamdan later toured the facilities, which include six buildings that offer innovative state-of-the-art public transport solutions. The design of the buildings is environmentally sustainable and meets the needs of People of Determination.
The station has a stand for 34 taxis and 60 docking stations for bicycles. It can handle up to 15,000 passengers per day with an estimated number of 10,500 passengers per day.
He also reviewed the e-scooter service as well as projects and initiatives of RTA to improve public bus services, bus stations to serve Expo 2020 visitors and initiatives focused on flexible mobility and shared transport.
Sheikh Hamdan was briefed by Al Tayer on the Al Ghubaiba Bus Station’s uniquely integrated multi-modal transport services connecting with the metro, public buses, marine transport and taxis.
He then reviewed RTA’s plan for upgrading a host of bus stations to better serve Expo 2020 visitors. The plan features construction works at 17 stations/stops in places like Al-Ghubaiba, Al Jafiliya and the Union Stations and the bus station serving Etisalat Metro Station.
The RTA plan encompasses the deployment of 614 buses and the opening of 23 bus routes and six temporary stops for serving Expo visitors. Two of the six temporary bus stops are located in Dubai Silicon Oasis and the International City.
The other four are in the Dubai Maritime City, Palm Jumeirah, Business Bay 1, and Al-Meydan. These projects complement RTA’s efforts to upgrade the public transport infrastructure to encourage people to use them in their daily commute.-TradeArabia News Service