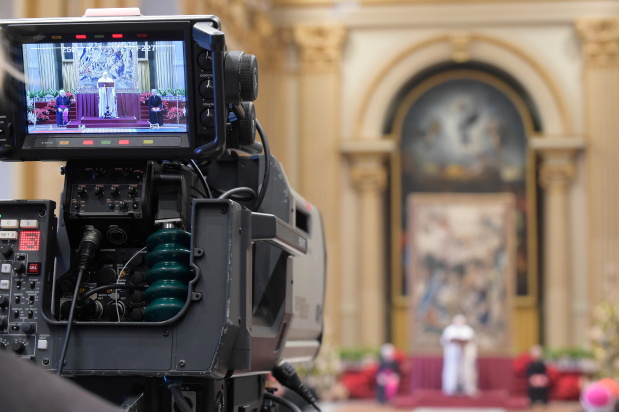 Pope Francis is seen in the viewfinder of a television camera as he speaks during the traditional greetings to the Roman Curia at the Vatican, December 21, 2020. Vatican Media/?Handout via REUTERS ATTENTION EDITORS - THIS IMAGE WAS PROVIDED BY A THIRD PARTY.

Vatican City: Pope Francis will read his Christmas message from inside the Vatican instead of from the outdoor central balcony of St. Peter's Basilica because of new coronavirus restrictions in Italy, the Vatican said on Tuesday.

In addition to the Christmas "Urbi et Orbi" (to the city and world) message, five addresses that were to have been delivered from a window of the Vatican's Apostolic Palace overlooking St. Peter's Square between Dec. 26 and Jan. 6 also will be moved indoors.

The restrictions mean people will not be able to go to St. Peter's Square. Papal events will be live streamed and broadcast on television.

Italians will be placed under a nationwide lockdown for much of the Christmas and New Year holidays. Non-essential shops will be shuttered between Dec. 24-27, Dec. 31-Jan. 3 and Jan. 5-6. On these days, people will be allowed to travel only for work, health or emergency reasons.

The rules will restrict the number of people allowed to attend major papal events inside St. Peter's Basilica, such as Christmas Eve Mass, New Year's Eve vespers, the Jan. 1 World Day of Peace Mass, and the Jan. 6 Mass on the Feast of the Epiphany.

The pope's Christmas Eve Mass will start at 7:30 p.m., two hours earlier than usual, to allow the limited number of people who can attend to be home by a 10 p.m. Italian curfew.

As a second wave of the pandemic hit Italy, his weekly general audiences were moved back indoors and held virtually without public participation following several months with a limited number of members of the public.

Italy, the first Western country hit by the virus, has seen 69,214 COVID-19 fatalities since its outbreak emerged in February, the highest toll in Europe and the fifth-highest in the world. It has also registered some 1.96 million cases to date.