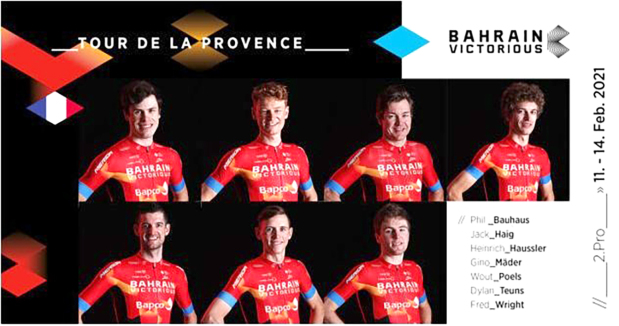 Team Bahrain Victorious is heading for the first cycling race of the season with a strong line-up.

Provence’s beautiful landscape provides ideal scenery for an early season race and a perfect challenge for riders at the beginning of a new season.

Sports director Rolf Aldag revealed to the GDN the team’s strategy. “We had a super good training camp with the whole team, and now we are looking forward to scoring results in the first race of the season,” he said.

“We will consider every stage like a one day race and fight for the win. Phil will fight on the sprint stages, Dylan on the hilly stages and, Jack, Dylan and Wout during the GC showdown halfway up to the Mont Ventoux.

“It is always tough to predict the first race of the season since we don’t know how well prepared our competitors are and how they trained during the winter. That’s why we won’t wait to see what others will do but ride with an offensive strategy from the very beginning.”

The riders feel fit and confident.

“I’m motivated to race again and the Tour de la Provence is a perfect start, with a few stages that fit me very well,” said Teuns.

Poels said he is looking forward to the event too: “I had a good winter and successful training camp with the team,” he said. “I believe we have a strong line-up, and I’m curious to see how the first race of the year will turn out.”

Haig shared the excitement of his co-riders, adding: “I’m excited but also a little nervous. That will be my first race with the new team, and it’s also a race I haven’t done before.

“I think it will be a good race to know how the team works and how I fit into the team. It’s also some rehearsal for some of the big races coming up, especially the UAE Tour, which will be my first race directly after Tour de la Provence.”

The Provence’s first race was organised in 2016 under Tour Cycliste International La Provence, and renamed in 2019, Tour de la Provence. This year’s opening stage covers 182.3km, from Aubagne to Six-Fours-Les-Plages.

The riders will start the second Stage in Cassis, a popular tourist destination famous for its cliffs, finishing 174.6km later in Manosque, the largest town and commune in the Alpes-de-Haute-Provence in southeastern France.

The third Stage of 153.9km is where the GC will most likely be decided with a mountain-top finish on Mont Ventoux. The climb will be an excellent rehearsal for all the riders heading to Tour de France this season, where it features on Stage 11.

The last 163.2km Stage starts in Avignon and concludes the race at Salon-de-Provence.