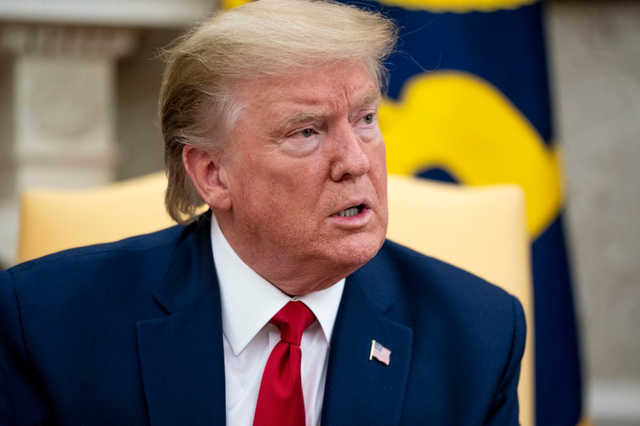 WASHINGTON: Former US President Donald Trump yesterday blasted the US Supreme Court after it paved the way for the release of tax returns and other records to New York investigators, calling it a “fishing expedition.”
“The Supreme Court never should have let this ‘fishing expedition’ happen, but they did,” he said in a statement released by his office. “I will fight on, just as I have, for the last five years.”
The US Supreme Court allowed a New York City prosecutor to obtain the former president’s tax returns and other records as part of an accelerating criminal investigation.
The justices without comment rebuffed Trump’s request to put on hold an October 7 lower court ruling directing the Republican businessman-turned-politician’s longtime accounting firm, Mazars USA, to comply with a subpoena to turn over the materials to a grand jury convened by Manhattan District Attorney Cyrus Vance, a Democrat.
“The work continues,” Vance said in a statement after the court’s action.
Trump issued a statement describing Vance’s investigation as part of “the greatest political witch hunt in the history of our country,” accusing New York Democrats of expending their energy on taking down a political opponent instead of tackling violent crimes.
“That’s fascism, not justice – and that is exactly what they are trying to do with respect to me, except that the people of our country won’t stand for it,” Trump added.
The Supreme Court’s action does not require Trump to do anything. The records involved in the dispute were requested from a third-party, Mazars, not Trump himself.
A Mazars spokesman said the company “remains committed to fulfilling all of our professional and legal obligations.”
Unlike all other recent US presidents, Trump refused to make his tax returns public. The data could provide details on his wealth and the activities of his family real-estate company, the Trump Organisation.
Reports on Friday said that Vance’s office had subpoenaed a New York City property tax agency, suggesting prosecutors are examining Trump’s efforts to reduce his commercial real-estate taxes for possible evidence of fraud.
The Supreme Court, whose 6-3 conservative majority includes three Trump appointees, had already ruled once in the subpoena dispute, last July rejecting Trump’s broad argument that he was immune from criminal probes as a sitting president.