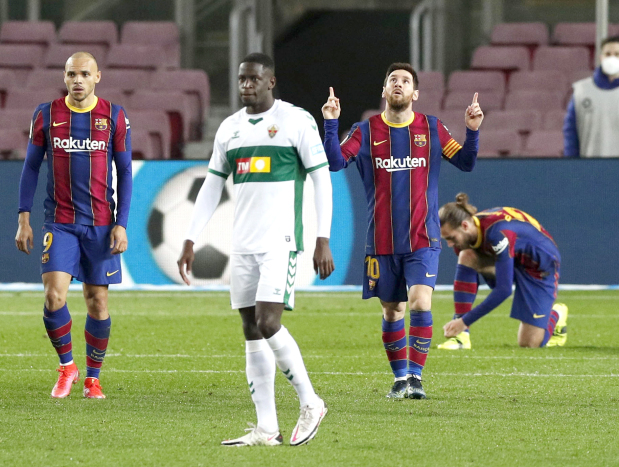 BARCELONA: Lionel Messi scored twice as Barcelona overcame an uninspiring first half to beat Elche 3-0 at home in La Liga last night and keep leaders Atletico Madrid in their sights.

The Catalans created little in one of their worst first-half displays at the Camp Nou this season but found a breakthrough early in the second when Martin Braithwaite released Messi with a classy backheel and the Argentine did the rest.

Barca, who failed to hold onto a narrow lead in Sunday’s 1-1 draw at home to Cadiz, got an all-important second goal in the 69th when Frenkie de Jong received the ball after some clever play from 18-year-old Pedri.

The Dutchman burst through the middle of the pitch and laid the ball off for Messi to dribble into the net for an 18th league goal of the season, extending his lead at the top of the scoring charts.

Left back Jordi Alba struck the third goal from another Braithwaite assist to round off a victory which took Barca back above Sevilla and into third in the standings on 50 points, five behind Atletico but having played a game more.

Sunday’s frustrating draw at home to Cadiz had interrupted a seven-game winning streak in the league and added to the pain of last week’s 4-1 routing at home to Paris St Germain in the Champions League.

Portuguese winger Francisco Trincao was Barca’s liveliest player in the first half and was twice denied by Elche keeper Edgar Badia, who also did well to keep out a header from De Jong, with Alba somehow missing the target on the rebound.

Barca regained their composure after the break and opened the scoring thanks to clever combination play between Braithwaite and Messi but were let off the hook moments later when Boye again missed the target.

Messi’s second goal calmed their nerves and they were hungry for more even after Alba’s strike.

Substitute Antoine Griezmann hammered the crossbar from just inside the area and then missed the target from an even easier position moments later.