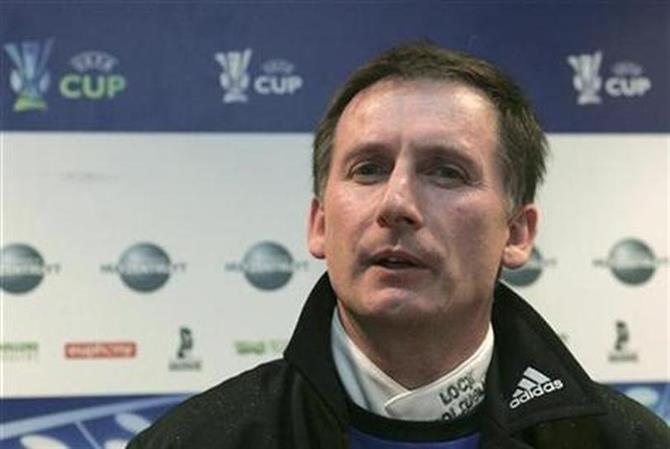 Glenn Roeder. (Reuters Photo)
Former West Ham United and Newcastle United manager Glenn Roeder has died at the age of 65 following a lengthy battle with cancer, the League Managers Association (LMA) said in a statement on Sunday.
Roeder played for Leyton Orient, Queens Park Rangers and Newcastle among other clubs before hanging up his boots in 1993. He went on to manage Gillingham, Watford and also had a stint at Norwich City. He also served as a coach under Glenn Hoddle for the England national team.
The LMA said that Roeder passed away battling a brain tumour.
"Football has lost a great servant today and our sincere condolences go to Glenn's family and friends," LMA chairman Howard Wilkinson said.
"A cultured defender as a player, he managed with a studious style and was always generous with his time and ideas.
"Glenn was such an unassuming, kind gentleman who demonstrated lifelong dedication to the game. Not one to court headlines, his commitment and application to his work at all levels warrants special mention."
LMA chief executive Richard Bevan hailed Roeder's contribution to the game.
"At every club, he chose to develop new talent and to give opportunities to the younger players in his charge. He will be sorely missed by all of the LMA's members and his colleagues from across the game," Bevan said.
Tributes poured in from Roeder's former teams and ex-England international Gary Lineker described him as "a real football man" with a great career on and off the field.
A skilful central defender during his playing days, Roeder became known for a technique fans called the "Roeder shuffle" which he would use to get away from tight situations.
"Can picture him on the ball now... We all knew he would do the step over but everyone fell for it," former Swindon Town and Brentford midfielder Chris Kamara tweeted.
Former England striker Michael Owen tweeted: "Why do the best people leave us so early? I'm devastated. A true gentleman. He will be sorely missed."