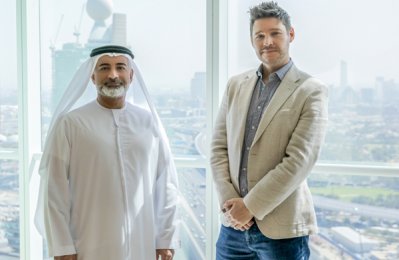 Mohamed AlRafi and Simon Hudson
Cheeze, a Silicon Valley technology startup established in 2018 by Simon Hudson, has partnered with a Dubai-based property developer to offer its engineering team a new base to develop and launch a new minting studio for NFTs (non-fungible tokens).
Cheeze has partnered with Mohamed AlRafi to start work on creating an engineering headquarters in Dubai and will continue to hire engineers over the coming months.
“Dubai is the perfect base to for a tech firm’s engineering team, with its record-breaking internet speed, advanced knowledge of Blockchain technology and contemporary working environments. AlRafi, who owns and operates a number of hugely successful businesses both globally and in Dubai, is now expanding his portfolio into the tech space by partnering with Hudson and investing in his company Cheeze,” a statement said.
Cheeze is gearing up to introduce its new app, which has an early access waitlist open and the BETA version is expected to be launched within the next few months.
The Cheeze app will allow people to mint their photos into what are called NFTs, giving users the ability to trade and sell them on the blockchain. With a wide target demographic of photographers, collectors and consumers, the concept has been bolstered by the recent boom in the NFT space with sellers such as Beeple and 3Lau making millions of dollars.
Cheeze aims to be the number one platform globally for photographers selling digital assets. The startup decided to bring this new app to the market following the success of its community chat app, Privy Chat. The company saw a spike in the number of users sharing and managing photos during the pandemic. Privy first launched back in 2018 at Apples WWDC event and was built to help people organise and manage group chat communities more efficiently. Privy will continue to be in the app stores and has an exciting roadmap of features to help private communities stay connected, a statement said.
Hudson, a serial entrepreneur, has formed a world-class team of advisors and investors.  These include Apple fellow, famous author and podcaster Guy Kawasaki, who has been with Hudson from day one. Other notable names include Netflix Co-Founder Marc Randolph, brand guru and marketer James Vincent, Startup Grind and Bevy co-founder Derek Andersen, Real Housewives of Beverly Hills star Paul Kemsley and celebrity photographer Pierre Auroux.
AlRafi has an impressive portfolio including chairing SRG Holding, a UAE-based third-generation family corporation, boasting several signature projects in realty and hospitality, primarily based in Dubai and London, with a roster of iconic properties, such as the High Holborn Estate, London and several skyscrapers in Dubai – UAE, amongst them the five-star Sheraton Grand Hotel. In addition to partnering with the company, AlRafi will also take on an advisory role to Hudson and the board.
“Having someone as experienced and knowledgeable as Mohamed advise me and the company is both exciting and powerful for our young company. As we expand into the UAE we are proud to have a business partner such as Mohamed and his team,” said Hudson.
“I first met Simon in October 2020 and was impressed by his passion and enthusiasm for technology. We have discovered synergies in business as well as both sharing the same vision to support innovation within the UAE,” said AlRafi.
For those wanting to be an early user of the latest app, a waitlist can be found at cheeze.com/joinbeta
- TradeArabia News Service