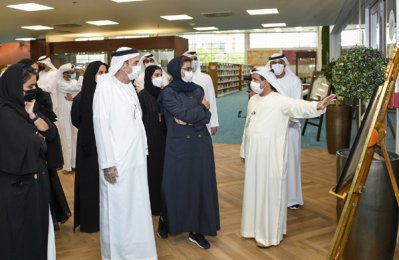 A lab dedicated to entrepreneurs at the College of Business and Economics - UAE University (UAEU) in Al Ain was opened yesterday (March 15) by Noura bint Mohammed Al Kaabi, UAE Minister of Culture and Youth.
During the inauguration, Al Kaabi toured the college's TV studio, the first of its kind in Al Ain, said a Wam news agency report.
The state-of-the-art facility is equipped with the latest technologies, in line with the highest international standards, to meet the growing needs of media students and hone their skills.
The minister also visited the campus of the College of Humanities and Social Sciences, which feature artworks, maps, rare books, excerpts from the French Club’s activities, photos and art works by the Korean Club students. She also visited the university’s library.
Zaki Anwar Nusseibeh, the Cultural Advisor to His Highness the President of the UAE, and the Supreme President of the UAE University, expressed his happiness at Al Kaabi’s visit and her inauguration of the lab.
The lab was built as part of the UAE Government Vision 2071, he added, noting that UAEU is committed to educating a generation who can keep pace with the latest developments in areas of entrepreneurship and innovation.
The launch of an entrepreneurship course by the college was also an important step, as it encourages student engagement in innovation and entrepreneurship, he further added, affirming that the college is committed to preparing innovative young cadres to work in areas relevant to the university’s strategy and the requirements of the UAE’s national agenda related to innovation.
The inauguration was attended by Prof Ghaleb Ali Al Hadrami, Acting Vice Chancellor of UAEU, and Prof Ahmed Murad, Acting Associate Provost for Research, along with Dr Ateeq Al Mansouri, Advisor to UAEU Supreme President, and several officials from the university.