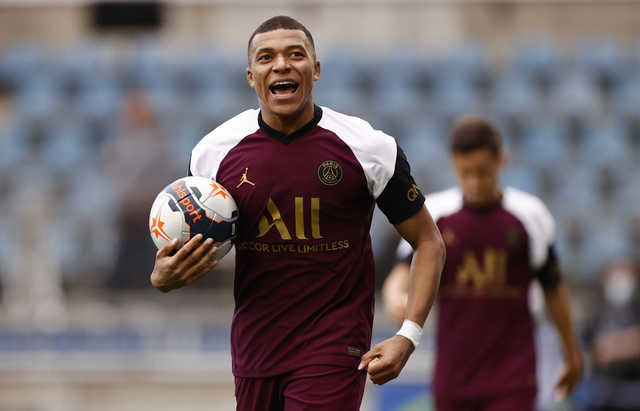 PARIS - Kylian Mbappe completed a remarkable week as he scored one and set up another to inspire Paris St Germain to a 4-1 win at Racing Strasbourg as the French champions reduced Lille's Ligue 1 lead to three points on Saturday.

The France striker, who netted a double in PSG's 3-2 win at Bayern Munich in the Champions League quarter-finals earlier this week, opened the scoring with Pablo Sarabia, Moise Kean and Leandro Paredes also on the scoresheet to put the capital side on 66 points from 32 games.

PSG, who host Bayern the return leg at the Parc des Princes on Tuesday, lead third-placed Monaco by four points before the principality team host bottom club Dijon on Sunday.

Strasbourg, who pulled one back through Moise Sahi, are 14th on 36 points.

Lille beat Metz 2-0 away on Friday.

PSG were without the suspended Neymar, with Marquinhos also missing out with an adductor muscle injury and Marco Verratti still in isolation after a positive Covid-19 test.

Idrissa Gueye, Julian Draxler and Angel Di Maria, who started against Bayern on Wednesday, were on the bench.

They went ahead in the 16th minute when league top scorer Mbappe, set up by Paredes, beat Matz Sels with an angled shot for his 21st goal of the season.

PSG doubled the tally 11 minutes later as Sarabia found the back of the net with a low crossed shot.

Kean added a third on the stroke of halftime after being played through by Mbappe, resisting Lamine Kone's challenge before firing past Sels.

Coach Mauricio Pochettino replaced Keylor Navas with Sergio Rico for the second half.

"We took him out as a precaution," Pochettino told a news conference.

"We have a great medical sector with great professionals, we will see, we hope there is nothing serious."

He did not elaborate.

Strasbourg reduced the arrears thanks to teenager Sahi in the 63rd minute, but the visitors made sure there would be no hope of a comeback in the 79th when Paredes netted with a superb 25-metre free kick.