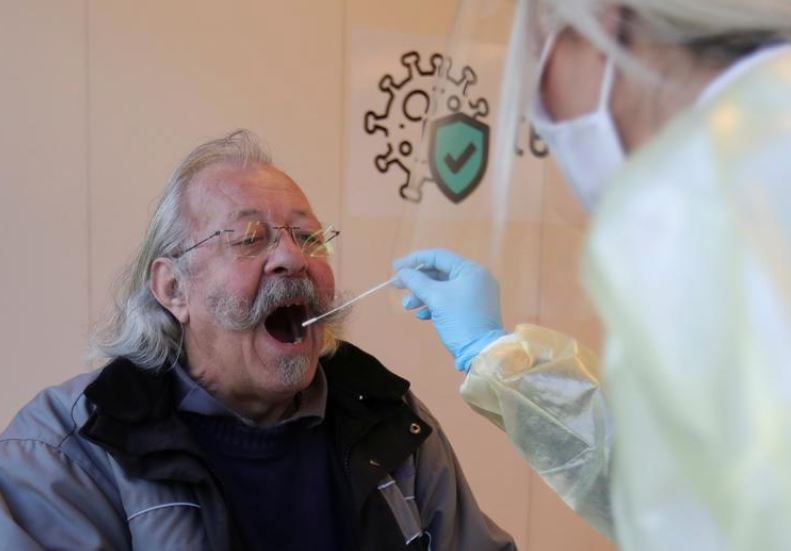 Garage owner John Moritz gets a mouth swab before going into the quick breath analyzer cabin to get tested for the coronavirus disease (Covid-19) at a testing location in Amsterdam, Netherlands March 1, 2021. (Image credit: Reuters)

AMSTERDAM: The Dutch government is expected to delay the long-awaited easing of lockdown restrictions including a nighttime curfew in an announcement later on Tuesday, due to stubbornly high Covid-19 infection rates that are putting pressure on hospitals.

The office of Prime Minister Mark Rutte office said on Sunday “it is still too early” to allow more people to gather in public places.

Authorities had hoped to reopen outdoor cafes and restaurants next week, but roughly six months after they shut, infection rates remain high and intensive care admissions are on the rise.

Current measures in the Netherlands, which has seen 1.3 million coronavirus cases and more than 16,700 deaths, include the first nighttime curfew since World War Two and a ban on public gatherings of more than two people.

Rutte is due to announce his cabinet’s latest decision during a televised news conference at 1900 CET (1700 GMT).

Nearly 70 per cent of Dutch intensive care beds are occupied by Covid-19 patients and hospital are admitting more patients, leading to warnings from care professionals that a third wave may not yet have peaked.

At the same time, hospitality associations and mayors from the biggest cities have called on the government to allow businesses with outdoor seating to open for customers, citing large numbers of people gathering in parks.

Like other European Union members, the Netherlands has been slower to roll out a Covid-19 vaccination programme than countries such as the United States, Israel and Britain.

The Dutch National Institute for Health (RIVM) said last week that it expected the third wave of the pandemic to decline from a late April peak as vaccination levels increase.