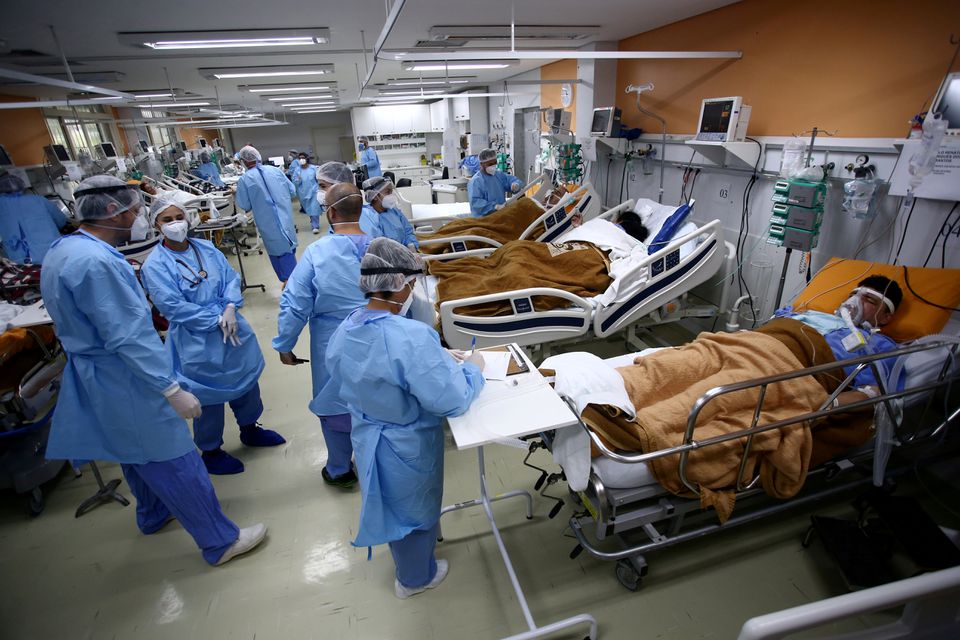 Medical workers take care of patients in the emergency room of the Nossa Senhora da Conceicao hospital that is overcrowding because of the coronavirus outbreak, in Porto Alegre, Brazil, March 11, 2021. (Reuters Photo)

Brazil's richest and most populous state, Sao Paulo, has warned its ability to care for seriously ill Covid-19 patients was on the verge of collapse as it ran perilously low on key drugs, according to a letter to the federal government seen by the Folha de Sao Paulo newspaper.

Sao Paulo state said it expects to run out of crucial intubation drugs, needed to sedate patients, in the next few days, the paper reported on Wednesday.

"Collapse is imminent," he said.

Gorinchteyn confirmed the letter in a news conference on Wednesday, telling reporters: "we need the federal government to help us."

The situation in Sao Paulo, which has one of Brazil's most sophisticated public hospital networks, is a dire indication of the strain on Brazil's healthcare system.

Brazil has for several weeks consistently had among the worst Covid-19 death tolls in the world, accounting for about a quarter of daily deaths attributed to the virus worldwide.

President Jair Bolsonaro has been widely criticized for his handling of the pandemic, including downplaying the disease's severity, promoting dubious treatments and repeatedly opposing social distancing measures.

Experts say his handling of the outbreak has encouraged the virus to run rampant, increasing the likelihood of mutations, such as the P1 variant, which has raised alarms worldwide.

Scientists studying the virus in Brazil have found the P1 variant is already mutating in ways that could make it better able to evade antibodies. read more

Brazil's vaccination rollout also lags those of other large economies and has been plagued by dysfunction.

On Wednesday, health minister Marcelo Queiroga said Pfizer Inc (PFE.N) would increase its deliveries of its coronavirus vaccine to 15.5 million doses in the second quarter, up from a previous estimate of 13.5 million.