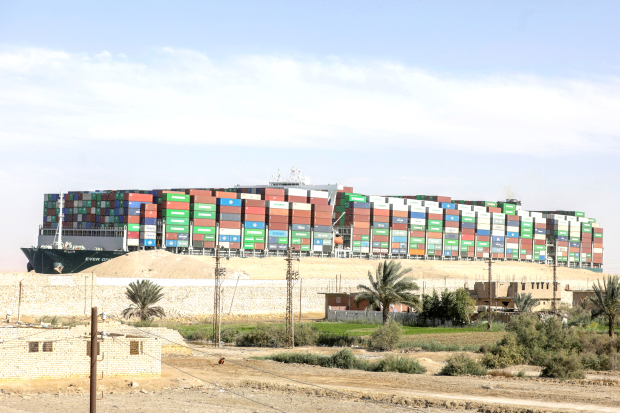 FILE PHOTO: Ship Ever Given, one of the world's largest container ships, is seen after it was fully floated in Suez Canal, Egypt March 29, 2021. REUTERS/Mohamed Abd El Ghany//File Photo

CAIRO: The cargo vessel that blocked global shipping in the Suez Canal and is caught in a legal dispute in Egypt is fit to sail once approval is given, its technical manager said yesterday.

The Ever Given was declared suitable for onward passage from the Great Bitter Lake to Port Said, where she would be assessed again before departing for Rotterdam, Bernhard Schulte Shipmanagement (BSM) said in a statement.

The ship has been in the lake, which sits between two sections of the canal, since being dislodged on March 29. The 400-metre (430 yard) vessel was stuck in the canal for six days, blocking traffic.

The Suez Canal Authority (SCA) said yesterday that negotiations aimed at reaching an agreement “may take some time”.

It has made a $916 million compensation claim against the ship’s Japanese owner Shoei Kisen, UK Club, one of its insurers, said.

The SCA has also obtained a court order to detain the ship as discussions over compensation continue.

“The SCA’s decision to arrest the vessel is extremely disappointing. From the outset, BSM and the crew on board have co-operated fully with all authorities,” BSM chief executive Ian Beveridge said in the statement.

“BSM’s primary goal is a swift resolution to this matter that will allow the vessel and crew to depart the Suez Canal.”

Taiwan’s Evergreen Line, which is the Ever Given’s charterer, said separately yesterday it was investigating the scope of the Egyptian court order “and studying the possibility of the vessel and the cargo on board being treated separately”.

Panama’s Luster Maritime and Japan’s Higaki Sangyo Kaisha, the vessel’s registered owners, have started legal proceedings in London’s High Court to open a limitation fund that lawyers say will serve as a cash pool of around $115m to satisfy valid English claims.

Japan’s Shoei Kisen is the beneficial, or ultimate, owner of the vessel.