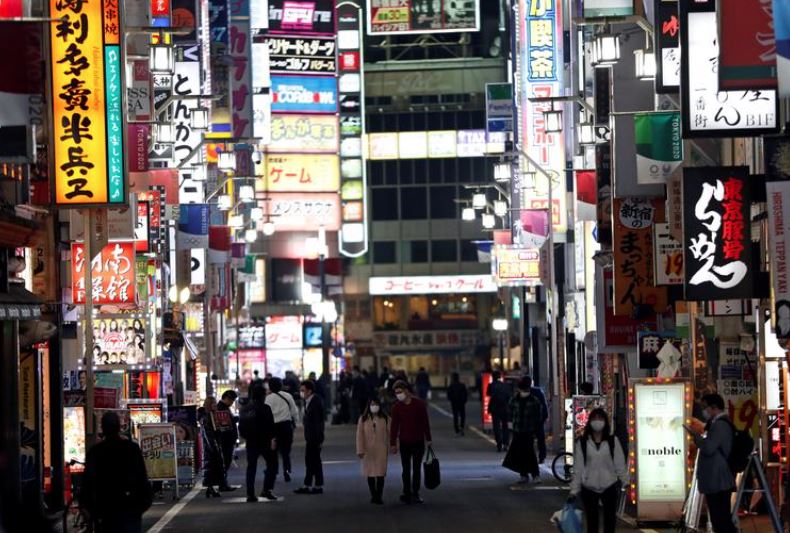 FILE IMAGE: Less than usual passersby are seen on a street after the government announced the state of emergency for the capital following the coronavirus disease (COVID-19) outbreak at Kabukicho shopping and entertainment district in Tokyo, Japan April 8, 2020. Reuters Photo

Tokyo: A recent surge in Covid-19 cases could see major parts of Japan slide back into states of emergency with authorities in Tokyo and Osaka looking at renewed curbs to stop the spread.

The new wave of infections complicates preparations for the Tokyo Olympic Games, which are due to start in July having already been postponed due to the global coronavirus outbreak last year.

Japan this month put Osaka, Tokyo, and eight other prefectures under "quasi-states of emergency" aimed at controlling the spread of Covid-19 with shorter business hours for restaurants and bars and stronger calls for teleworking.

But those measures have done little to reverse the trend so far, with Osaka reporting a record 1,220 cases on Sunday, two weeks after those restrictions took effect as a mutant strain fueled the spread.

"The fruits of these measures should be appearing now," Osaka Governor Hirofumi Yoshimura told reporters in comments carried online.

"Medical services are also in a dire state, and we've decided that we need a state of emergency. We need stronger measures such as those that would stop the movement of people," he said, adding that Japan's third-most populous prefecture would make the formal request to the government on Tuesday.

In a TV Asahi poll published Monday, just over half of respondents said they believed the "quasi-emergency" restrictions were ineffective.

Tokyo is also considering a state-of-emergency request, Governor Yuriko Koike told reporters late on Sunday, in a step backwards as Japan scrambles to bring the pandemic under control ahead of the Summer Olympics.

Asked about possible requests from Osaka and Tokyo, Chief Cabinet Secretary Katsunobu Kato, the government's top spokesman, said any such calls would need to be considered "swiftly."