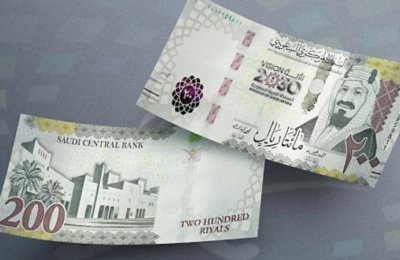 The Central Bank of Saudi Arabia has announced the introduction of a new banknote of SR200  denomination, to mark the fifth year of launch of the Kingdom Vision 2030. It came into circulation starting from today (April 25), reported the Saudi Press Agency (SPA).
The central bank added that the launch of the new note is based on the fourth article of the Saudi Monetary System issued under the Royal Decree no. 5.
The central bank pointed out that the new SR200 denomination will be introduced and circulated as of Sunday, in addition to other banknotes of all other denominations, already publicly circulated, as official and legal tender banknotes.