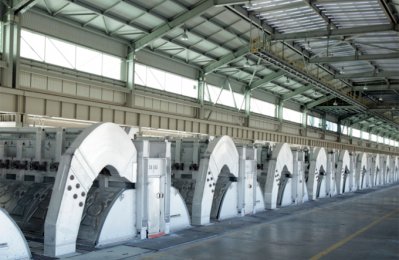 EGA smelter. Image © Emirates Global Aluminium
Emirates Global Aluminium (EGA), the largest industrial company in the United Arab Emirates outside oil and gas, today announced the start-up of the first section of an expansion to the company’s Al Taweelah smelter.
The 26 new reduction cells at potline 1 at Al Taweelah will now ramp-up to produce some 30,000 tonnes of aluminium per year.
In total EGA is building 66 new reduction cells to extend all three potlines at Al Taweelah. The project will increase production capacity at Al Taweelah by some 78,000 tonnes of hot metal per year. The start-up of the extension to potline 2 and then potline 3 will take place later this year, the company said.
Overall project completion stands at 70 per cent, on schedule despite the challenges of Covid-19.
Abdulnasser Bin Kalban, Chief Executive Officer of EGA, said: “This project to expand our production at Al Taweelah is part of our ongoing debottlenecking of production and investment in high return growth opportunities. The world requires aluminium to build back better after Covid-19, and this expansion will enable us to supply even more of the metal we all need.”
Some 950 people are currently working on the Al Taweelah smelter expansion project, with over 2.1 million hours of work completed so far with a world-class safety performance. There have been zero injuries leading to time off work.
Like all EGA’s aluminium production lines, the extensions use EGA’s proprietary aluminium smelting technology developed in the UAE. The new reduction cells in potline 1 and 2 are EGA’s DX technology, whilst the new reduction cells in potline 3 are EGA’s DX+ Ultra technology. Both technologies are amongst the most energy efficient in the world.
EGA has developed its own technology in the UAE for more than 25 years. In 2016 EGA became the first UAE industrial company to license its core process technology internationally, exporting its DX+ Ultra technology to Aluminium Bahrain.
EGA has early stage agreements with companies in both Indonesia and Colombia that could lead to exports of EGA technology to build aluminium smelters.
The start-up of the 26 new reduction cells takes EGA’s total number of reduction cells in both Jebel Ali to Al Taweelah to 2,803. EGA makes one-in-every 25 tonnes of aluminium produced worldwide, and is the largest ‘premium aluminium’ producer.
Last year EGA sold some 2.52 million tonnes of cast metal.  EGA’s metal is the biggest UAE export after oil and gas. Sales to local customers support a domestic aluminium sector that produces everything from car parts to electricity transmission cables. The aluminium sector as a whole is one of the UAE’s largest industries, accounting for 1.4 per cent of the economy and supporting 60,000 UAE jobs. - TradeArabia News Service