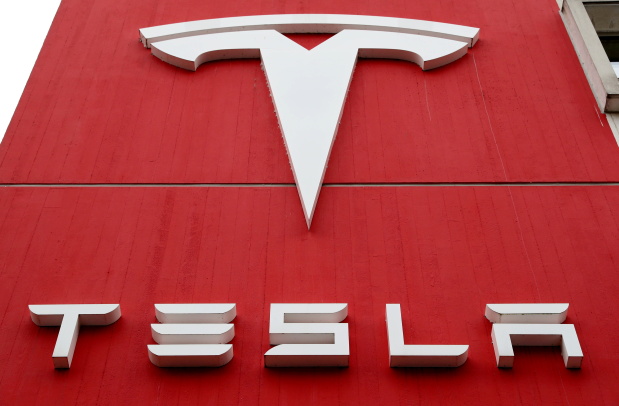 FILE IMAGE: The logo of car manufacturer Tesla is seen at a branch office in Bern, Switzerland October 28, 2020. Reuters Photo

Shares of Tesla Inc fell about 4% on Tuesday as investors were concerned about its main revenue drivers and the impact of a global chip crunch on its operations as it ramps up production.

The electric-car maker's quarterly revenue made it barely past estimates, relying mostly on sales of environmental credits and the liquidation of 10% of its $1.5 billion bitcoin investment.

"A global shortage of computer chips is expected to limit production from all manufacturers in the immediate future, and Tesla won't be exempt," said Nicholas Hyett, equity analyst at Hargreaves Lansdown.

"Given the ongoing importance of its production ramp up, it may even be more heavily impacted."

Tesla said on Monday it earned $518 million from sales of environmental credits, up 46% from a year earlier. Tesla earns credits for exceeding emissions and fuel economy standards and sells them to other automakers that fall short.

Tesla has posted a profit for seven quarters in a row, most of which was driven by gains from sales of environmental credits.

"The low number of deliveries of the Model S and X and the fact that no Model S and X were produced in Q1 also stand out negatively," Schwope added.

Shares of the automaker were down 4.2% at $707.25 in morning trade. They had surged more than 700% last year, making Tesla the world's most valuable automaker.