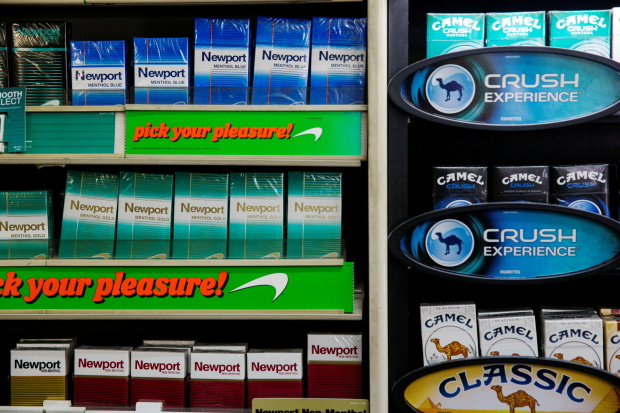 FILE IMAGE: Newport and Camel cigarettes are stacked on a shelf inside a tobacco store in New York July 11, 2014. Reuters Photo

The US Food and Drug Administration on Thursday proposed a ban on menthol cigarettes and flavoured cigars in the United States, a win for anti-tobacco and civil rights groups, but a move that could erase a huge chunk of sales for cigarette manufacturers.

The FDA was forced to act by an April 29 court deadline to respond to a citizen's petition from 2013 seeking a ban on menthol cigarettes that activists say impact Black Americans proportionately higher from the industry's marketing.

Altria Group Inc and Reynolds America, a unit of British American Tobacco Plc, said they would evaluate the latest proposal, but stated that the published science on the matter does not support regulating or banning menthol cigarettes.

Shares of Altria, British America Tobacco and Imperial Brands Plc were down about 1%.

Imperial's U.S. business, ITG Brands, said the announcement was disappointing, but not unexpected.

"We are hopeful that FDA will follow the law and prioritize sound policy and science over political pressure," said ITG, which houses the Winston and Kool cigarette brands.

According to a Bernstein research estimate, British American Tobacco generates 55% of its cigarette volumes in the United States from menthols, led by its Newport brand, compared with 30% for Imperial Brands and 17% for Altria Group.

The FDA said it was working toward issuing proposed product standards within the next year in its move to ban menthol as a flavour in cigarettes and ban all flavours in cigars.

For decades, anti-smoking groups sounded the alarm on mentholated cigarettes, arguing they contribute to disproportionate health burdens on Black communities and play a role in luring young people into smoking.

"Banning menthol - the last allowable flavour - in cigarettes and banning all flavours in cigars will help save lives, particularly among those disproportionately affected by these deadly products," Acting FDA Commissioner Janet Woodcock said in a statement.

The ban, however, is likely to take years to implement with looming legal challenges from the tobacco industry, which has repeatedly battled the FDA to try and block anti-tobacco regulation.

Menthol cigarettes, banned in many U.S. states including California and Massachusetts, account for more than a third of the industry's overall market share even as smoking rates have declined in the United States for many years.