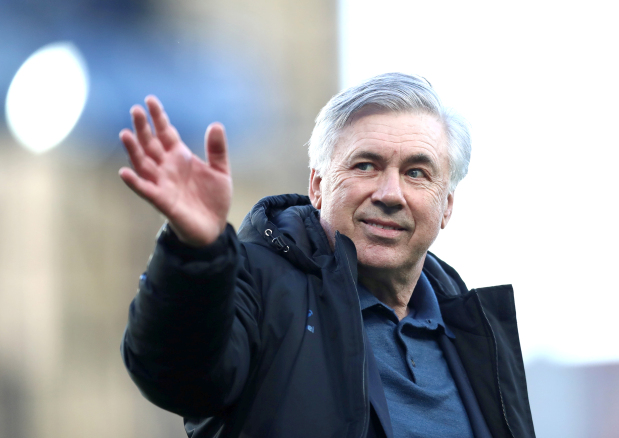 Everton manager Carlo Ancelotti waves to fans during a lap of appreciation after the match, as a limited number of fans are permitted at outdoor sports venues Pool via REUTERS/Jan Kruger EDITORIAL USE ONLY. No use with unauthorized audio, video, data, fixture lists, club/league logos or 'live' services. Online in-match use limited to 75 images, no video emulation. No use in betting, games or single club /league/player publications. Please contact your account representative for further details./File Photo

MADRID: Carlo Ancelotti returned to Real Madrid for a second spell as coach yesterday, re-joining the club from Everton, after agreeing a three-year deal at the Bernabeu.

The Italian was previously in charge of Real between 2013 and 2015, and replaces Zinedine Zidane, who left the La Liga club last month.

“While I have enjoyed being at Everton I have been presented with an unexpected opportunity which I believe is the right move for me and my family at this time,” Ancelotti said in a statement on the Everton website.

Ancelotti has one of the most-decorated CVs in world football and won the Champions League with Real in 2014, helping the Spaniards to their fabled ‘Decima’ (10th) European crown, before being sacked 12 months later.

The 61-year-old is one of three coaches, along with former Liverpool manager Bob Paisley and Zidane, to have won the European Cup or Champions League on three occasions, having also led AC Milan to glory in 2003 and 2007.

“Carlo Ancelotti will be the new first team coach for the next three seasons,” a brief Real Madrid statement read.

Ancelotti will sign his contract and be presented to the media on Wednesday.

The move comes following Zidane’s decision to step down five days after his team were pipped to the La Liga title by city rivals Atletico Madrid.

Real finished two points behind Atletico, were knocked out of the Champions League in the semi-finals by eventual winners Chelsea and suffered a humiliating Copa del Rey exit to third division minnows Alcoyano during a rare trophy-less season.

Zidane subsequently hit out at the club in an open letter, saying: “I’m leaving because I feel the club no longer has the faith in me I need, nor the support to build something in the medium or long term.”

It brought an end to a second spell in charge of the club that was fraught with tension.