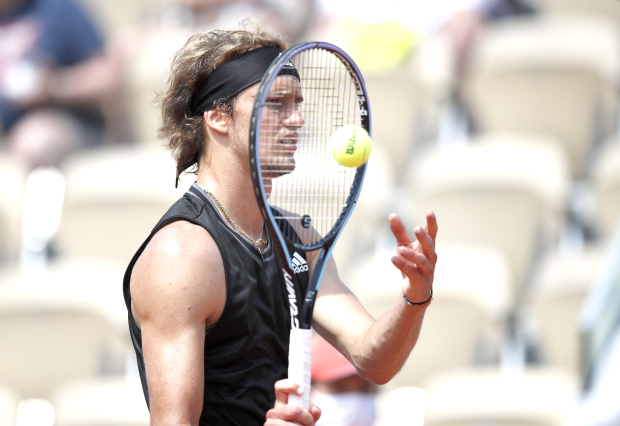 PARIS: German sixth seed Alexander Zverev blew hot and cold with his serve but had enough artillery to take down Russian qualifier Roman Safiullin 7-6(4) 6-3 7-6(1) to reach the third round of the French Open yesterday.

Zverev and Safiullin never contested a Tour-level match before yesterday but met three times as juniors with the German winning all three in straight sets.

But the 182nd-ranked Russian, who mostly plies his trade on the challenger circuit, went toe-to-toe with Zverev in the baseline battle in the opening set before the German got the crucial break in the 11th game.

Serving for the set, Zverev committed two double-faults to give away the advantage and had another in the tie-breaker but he recovered to take the lead with back-to-back aces in the first match of the day on Suzanne Lenglen court.

Double faults continued to haunt the 24-year-old German in the second set as he smashed his racquet on the court in frustration and suffered a service break. But he recovered spectacularly to take the set by winning five games in a row.

Safiullin continued to trouble Zverev in the third set and forced the German, who rallied from two sets down to defeat qualifier Oscar Otte in Sunday’s opening round, to dig deep.

Zverev, who served 15 aces against 10 double faults, was once again forced to overcome a 4-1 deficit to take the third set into a tiebreaker.

But the US Open finalist served strongly and outplayed Safiullin in the tiebreaker to set up a clash against Serbia’s Laslo Djere, who came back from a two-set deficit to beat countryman Miomir Kecmanovic 4-6 4-6 6-3 6-2 6-3.

Greek fifth seed Stefanos Tsitsipas strolled past Spaniard Pedro Martinez 6-3 6-4 6-3 in a scrappy contest to reach the third round.

Tsitsipas, who reached the semi-finals in 2020, is considered one of the main contenders to challenge Rafa Nadal for the title at Roland Garros after the 22-year-old’s triumph at the Monte-Carlo Masters and in Lyon in the lead-up to the claycourt Grand Slam.

The 103rd-ranked Martinez gave a good account of himself during parts of the match but did not have enough in his locker to put significant pressure on Tsitsipas in their first meeting.

The 24-year-old had his chances, though, on Tsitsipas’s serve but could convert only four of his 15 breakpoint opportunities.

The Greek broke his opponent’s serve eight times and hit his 45th winner on matchpoint to set up a third-round meeting with American John Isner, who defeated Serbian Filip Krajinovic 7-6(6) 6-1 7-6(5).

Japan’s Kei Nishikori survived his second five-set match at this year’s French Open on Wednesday, outlasting Russian 23rd seed Karen Khachanov in a thrilling four-hour battle to win 4-6 6-2 2-6 6-4 6-4 and reach the third round.

Next up for the Japanese will be Swiss world number 150 Henri Laaksonen, who ousted Spaniard 11th seed Roberto Bautista Agut with a 6-3 2-6 6-3 6-2 victory.