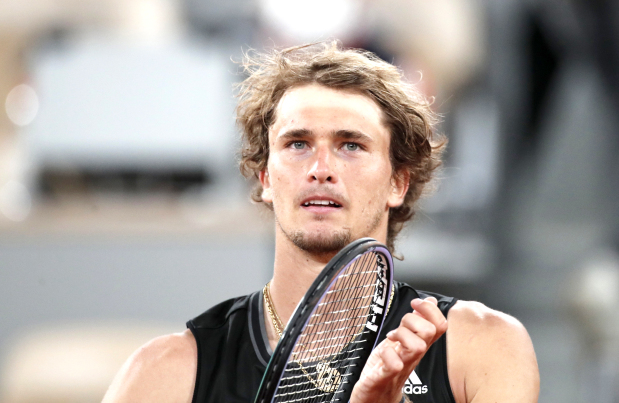 Zverev, who won the clay court title in Madrid and lost to Rafael Nadal in the quarter-finals in Rome in the lead-up to Roland Garros, had too much for his 55th-ranked opponent as he set up a clash with Japan’s Kei Nishikori.

He has never been further than the quarter-finals here but his part of the draw seems clear until the last four, where he could face fifth seed Stefanos Tsitsipas, with the ‘Big Three’ – Roger Federer, Nadal and Novak Djokovic – in the other half.

After a rough start in the tournament, when he fought back from two sets down to beat fellow German Oscar Otte, Zverev is clicking into gear and Djere only threatened briefly in the second set.

Zverev won the first four games en route to bagging the opening set without much bother under the roof of court Philippe Chatrier.

Djere, however, broke to love early to open a 3-0 lead in the second set as Zverev hit a string of unforced errors. He regained his composure to save a set point and break back for 5-4. He stole his opponent’s serve again to move 6-5 up and close the set on serve.

The German took command of the third set with a break in the first game and never looked back.

Meanwhile, Nishikori booked a place in the last-16 when his Swiss opponent Henri Laaksonen retired with an injury after dropping the opening set 7-5.

After overcoming two brutal five-set encounters this week, Nishikori spent just 58 minutes on Court Simonne-Mathieu to ensure a safe passage to the second week of a Grand Slam for the first time since Wimbledon 2019.

World number 150 Laaksonen, playing in the third round of a major for the first time, appeared to have picked up a thigh injury early in the opening set and was forced to take an off-court medical timeout.

Russian Daniil Medvedev stormed into the fourth round with a commanding 6-4 6-2 6-4 win against towering American Reilly Opelka.