Bahrain turned on the power in the second half to beat Hong Kong 4-0 in their final Group C tie of the Asian Qualifiers for the Fifa World Cup 2022 and AFC Asian Cup 2023 last night.

The win moved the West Asians to third place on 15 points, three behind group winners Iran who beat Iraq 1-0 in the day’s other match. Iraq ended their campaign on 17 points.

Bahrain were on the attacking foot from the start as they pressed for an early goal but couldn’t get their early shots on target while Hong Kong had to play in their own half in the opening minutes.

Hong Kong did try to make inroads but Bahrain nearly punished them in the 25th minute as Sayed Saeed sent a cross into the are but a sliding Hashem Sayed Isa was unable to connect.

In the 35th minute, Ahmed Moosa sent in a flying cross with Mahdi Humaidan rising highest to head home for the Bahrainis but their celebration was cut short as the goal was ruled offside.

Bahrain continued to find ways from the right flank but Mixu Paalatelainen’s side defended in numbers to keep the goalless deadlock heading into the break.

Hong Kong goalkeeper Yapp Hung Fai was kept busy in the second half, having to make back-to-back saves against Saeed and Humaidan’s strikes, but Saeed got a touch on a loose ball in the 49th minute to end the stalemate.

Hong Kong suffered further setback in the 53rd minute when the referee pointed to the penalty spot after Sayed Isa was brought down inside the box, and the forward made no mistake to score Bahrain’s second goal of the night.

There would be one more for Bahrain as Hong Kong conceded another penalty in the 88th minute with Ali Madan brought down in the box, with Ismael Abdullatif stepping up to make it 4-0. 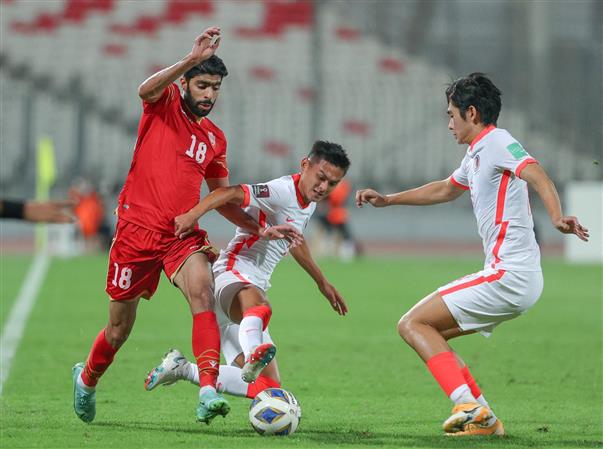