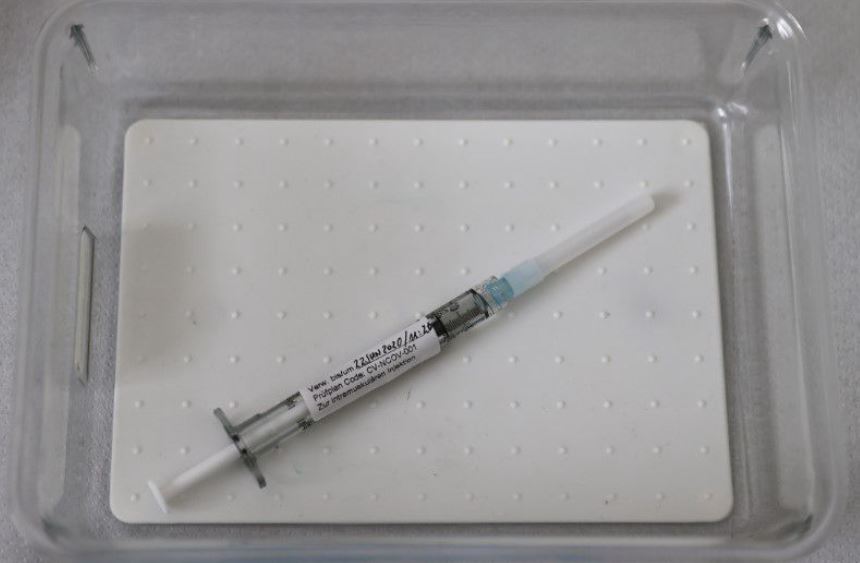 A vaccination against the coronavirus disease (Covid-19) from German biotechnology company CureVac is ready to use at the start of a clinical test series in the tropical institute of the university clinic in Tuebingen, Germany, June 22, 2020. (Image credit: Reuters)

German biotech CureVac NV said on Wednesday its Covid-19 vaccine was only 47% effective in a late-stage trial, missing the study’s main goal and throwing in doubt the potential delivery of hundreds of millions of doses to the European Union.

The disappointing efficacy of the shot known as CVnCoV emerged from an interim analysis based on 134 Covid-19 cases in the study with about 40,000 volunteers in Europe and Latin America.

The stakes for CureVac and prospective buyers of its vaccine in Europe had risen after age limits were imposed on the use of the Johnson & Johnson and AstraZeneca vaccines due to a link to extremely rare but potentially fatal clotting disorders.

CureVac’s shot was also expected to help in low and middle-income countries that have lagged far behind richer nations in the global immunisation drive.

As CureVac’s only major supply deals, the European Union in November secured up to 405 million doses of the vaccine, of which 180 million are optional. That was followed by a memorandum of understanding with Germany for another 20 million doses.

CureVac’s US traded shares fell 50.6% to $46.81 in after-hours trading following publication of the data.

The company said at least 13 virus variants accounted for the infections among the study population.

Out of the reported Covid-19 cases in the trial, 124 were sequenced to identify the variant causing the infection, it said. One case was attributable to the original version of the SARS-CoV-2 coronavirus that emerged in Chinese city of Wuhan in late 2019, while 57% of the cases were caused by more highly transmissible so-called variants of concern.

The company added that the interim results suggest the vaccine is effective in younger participants but did not prove efficacy in those above age 60, the age group most at risk for severe Covid-19.

“While we were hoping for a stronger interim outcome, we recognize that demonstrating high efficacy in this unprecedented broad diversity of variants is challenging. As we are continuing toward the final analysis with a minimum of 80 additional cases, the overall vaccine efficacy may change,” said Chief Executive Franz-Werner Haas.

Dr. Amesh Adalja, in infectious disease expert at the Johns Hopkins Center for Health Security, said the variants did not completely explain the efficacy number and he still wants to see data specifically about CureVac’s ability to stop serious disease, hospitalization and death. “If it can do that, even with a 47% efficacy in symptomatic disease, that’s still a very valuable thing. That’s all we’ve ever wanted vaccines to do,” he said.

Dr. Peter Hotez, a virologist and dean of the National School of Tropical Medicine at Baylor College of Medicine, said it was not clear if the issue was variant-specific or the vaccine’s inability to create high levels of neutralizing antibodies.

Since starting out in 2000, Tuebingen-based CureVac has focused on so-called messenger RNA (mRNA) technology, which is also behind the success of BioNTech and partner Pfizer as well as Moderna, whose vaccines have proved more than 90% effective in preventing illness.

Prior to the emergence of the highly effective vaccines, the US Food and Drug Administration had targeted at least 50% efficacy, which CureVac has fallen short of in the interim analysis. The World Health Organization had said it was looking for at least 70% efficacy.

While late-stage trials of the BioNTech/Pfizer and Moderna vaccines were conducted when the original version of the virus was dominant, real-world data has so far suggested only somewhat weaker protection against the new variants.

CureVac, which is backed by investors Dietmar Hopp, the Gates Foundation and GlaxoSmithKline, as well as the German government, had aimed to produce up to 300 million doses of the vaccine in 2021 and up to 1 billion doses in 2022.

GSK has agreed to collaborate with CureVac on production as well as on development of the next-generation vaccines. A company spokesman said early, preclinical data indicated a 10-fold increase in immunogenicity versus the first. “We aim for availability of a second-generation Covid-19 vaccine as early as the second half of 2022, subject to regulatory approvals,” he said.