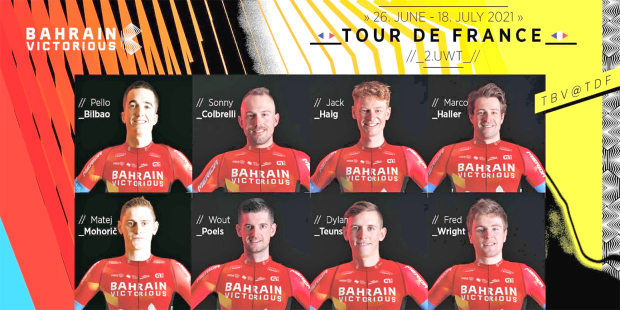 Team Bahrain Victorious head to Tour de France with a strong line-up and momentum off the back of a strong performance at the Giro d’Italia.

Jack Haig leads the line-up, with GC ambitions following his solid performance at the Dauphine.

Along with GC ambitions, the team is positioned to race proactively with potential stage winners, such as 2019 stage winner Dylan Teuns, Sonny Colbrelli off the back of an impressive performance at the Dauphiné, and Matej Mohorič, who showed his versatility at the Tour of Slovenia.

Wout Poels and Pello Bilbao line up to support in the high mountains – two riders who have demonstrated they can place high in the GC, evident by their top 10 finishes in Grand Tours last year. For the flat stages, experienced road captain Marco Haller and young Fred Wright will provide their support.

The 21 stage race starts in Brest on June 26, covering 3,383km before the iconic finish on the Champs Elysee in Paris. In between, the race will feature two Time Trials, with the second on the penultimate stage, like last year’s edition.

Two fast finishes on the opening stages that suit puncheurs and versatile climbers – an early opportunity for Sonny or Dylan to move into Yellow. The first GC battle starts on Stage 5, with a 27.2km Time Trial from Changé to Laval Espace Mayenne.

Stage 9 will be the hardest of the stages ahead of the first rest day. The riders take on five categorised climbs, with a gruelling finish up the 21km climb of Montée de Tignes, averaging 5.6 per cent. From there, Stage 11 will be another testing day, as riders climb the iconic Mont Ventoux twice, with the second route to the top being a 15.7km climb averaging 8.8pc.

The GC battle will be in full force with two back to back summit finishes on Stages 17 and 18. Stage 17 from Muret goes over two cat 1 climbs before the Hors Categorie climb Col du Portet, 16km long averaging 8.7pc. Things don’t get easier on stage 18 with a 130km stage, with two Hors Categorie climbs, finishing atop Luz Arididen.

The final fight for yellow, like last year, will come on the penultimate stage – a 30.8km Time Trial from Libourne to Saint Emilion. The flatter profile compared with last year may not see significant time gaps eaten up. However, it can still shake the final positions in the GC ahead of the final stage into Paris and ultimately decide this year’s winner.

Performance director Roger Hammond said: “The team comes to the tour following great performances. Our selection of riders puts us in good stead to battle for GC and be proactive across other stages.

Obviously, after the Dauphiné, there was the temptation to take Mark Padun to the Tour. The same goes for Gino Mäder after his Giro and Tour de Suisse wins. However, these are young talents in the team with other goals this season, and the team has a responsibility to look at the longer-term project for these riders.”

Sport director Rolf Aldag said: “The whole team is super-motivated to entertain fans of cycling all around the world with an aggressive way of racing.”