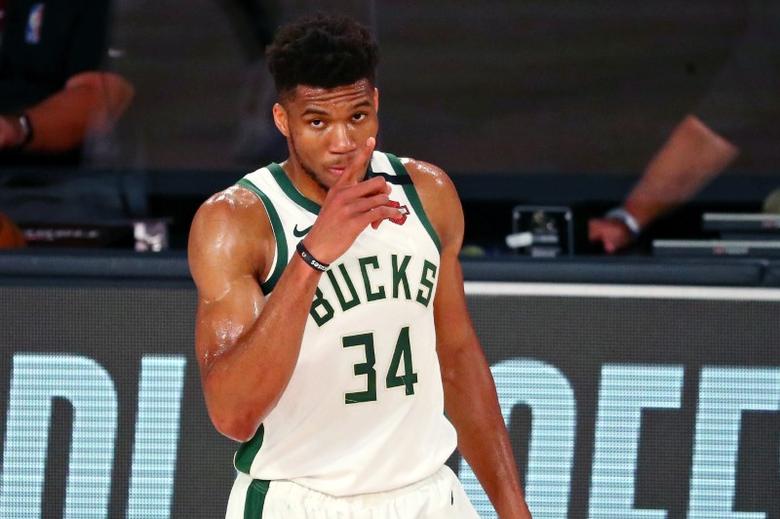 FILE PHOTO: Sep 6, 2020; Lake Buena Vista, Florida, USA; Milwaukee Bucks forward Giannis Antetokounmpo (34) gestures after a play against the Miami Heat during the first half of game four of the second round of the 2020 NBA Playoffs at ESPN Wide World of Sports Complex. (Reuters Photo)

MILWAUKEE: Giannis Antetokounmpo dominated again and the Milwaukee Bucks won their first NBA Finals game since 1974 thanks to a supporting cast that delivered for the first time in the best-of-seven series.

Coming home appeared to give new life to shooting guard Khris Middleton and point guard Jrue Holiday, who each carried the Bucks for stretches Sunday.

"I think part of it is being at home, and being aggressive," Holiday said.

Middleton had 15 first-half points and Holiday connected for four 3-pointers in an explosive third quarter as the Bucks pushed their 15-point halftime lead to 22.

Milwaukee's Big Three was 28 of 51 from the field and 16 of 20 from the free throw line. Antetokounmpo played 38 minutes and had 14 field goals, made 13 free throws and 13 rebounds.

Sunday's win was the first for Milwaukee in a Finals game since Game 6 in 1974.

Holiday insisted prior to Game 3 the Bucks were comfortable having been down 2-0 already in these playoffs -- to the Nets, before winning the Eastern Conference semifinals in seven games -- and would get a boost being on their home floor.

Antetokounmpo had five rebounds and four assists in the first quarter on Sunday, consciously looking for Middleton and Holiday to spark the rest of the offense.

"I'm just trying to take one possession at a time. Every possession is different," Antetokounmpo said.

He found attack mode soon after, and has 83 points in the past two games to put his left knee injury fully in the rearview mirror. Mind games prevalent at the foul line in Phoenix seemed to be flushed by Antetokounmpo at home, too. He made 19 of 30 foul shots in two games in Phoenix, but made 13 of 17 Sunday.

Phoenix couldn't keep pace and the game began to get away in the second quarter as the Suns missed 12 of 14 attempts from 3-point range in the first half. P.J. Tucker and Holiday bottled up Devin Booker, who averaged 27 points in the first two games of the Finals and finished with 10 in Game 3.

"Their aggression, their defense. They keyed on him," Suns coach Monty Williams said. "He missed some shots. So that's going to happen. He's been in this situation before, as you guys alluded to. When you get to the Finals, it means you've been in a number of situations. So this is nothing new to us anymore. He'll bounce back."

His 3-of-14 shooting night in a loss helps shift the momentum of the best-of-seven series.

With two days off before the Bucks get a chance to even the series on Wednesday in Game 4, Suns coach Monty Williams has some confidence-building to do in Wisconsin.

The Suns also need an answer for protecting the rim.

Milwaukee ate in the paint, shredding the Suns' small-ball lineup as DeAndre Ayton sat idle due to foul trouble. The Bucks, who had 54 points in the paint in Game 2, matched that number in Game 3. They also got 22 bench points and big minutes from fan favorite Bobby Portis. He had nine points in the first half and ended the game with 11 points and eight boards.

Threes started to fall for the Suns in the third quarter, but Booker never found a rhythm. He was held to 10 points or fewer for the first time since Dec. 29, when he had eight against the New Orleans Pelicans.

Cam Johnson came off the bench and tried to keep Phoenix in the game in the third before Antetokounmpo completed a three-point play and found Pat Connaughton for a 3 to end the quarter. Johnson's emphatic, and-one poster dunk over P.J. Tucker had cut the lead to 10, and his reverse layup on the next possession made it an eight-point game just four minutes earlier.

Booker did not play in the fourth quarter. Paul left the game for good with the Suns down 23 with 5:02 left in the game. He had a team-high 19 points and nine assists, scooting past Scottie Pippen on the all-time playoffs assist list. Paul is now ninth with former Suns great Steve Nash sitting one spot ahead.

The Bucks led 60-45 at halftime on the legs of a 21-7 run closing out the second quarter, largely with Ayton on the bench. He went back to the pine with 10:24 left in the third after his fourth foul.

Ayton started the game on fire with 16 points in the first 14 minutes but finished with just 18 on 8-of-11 shooting.

"He puts pressure on the rim. We tried to post him up a couple of times and he scored," Williams said. "He just had a good game going, but the foul trouble didn't allow for him to continue it. When he can have that kind of production, it makes us a really good team. And we expect him to play that way again."

Booker missed nine of his 11 shot attempts in the first half with the Bucks committed to challenging every bounce.