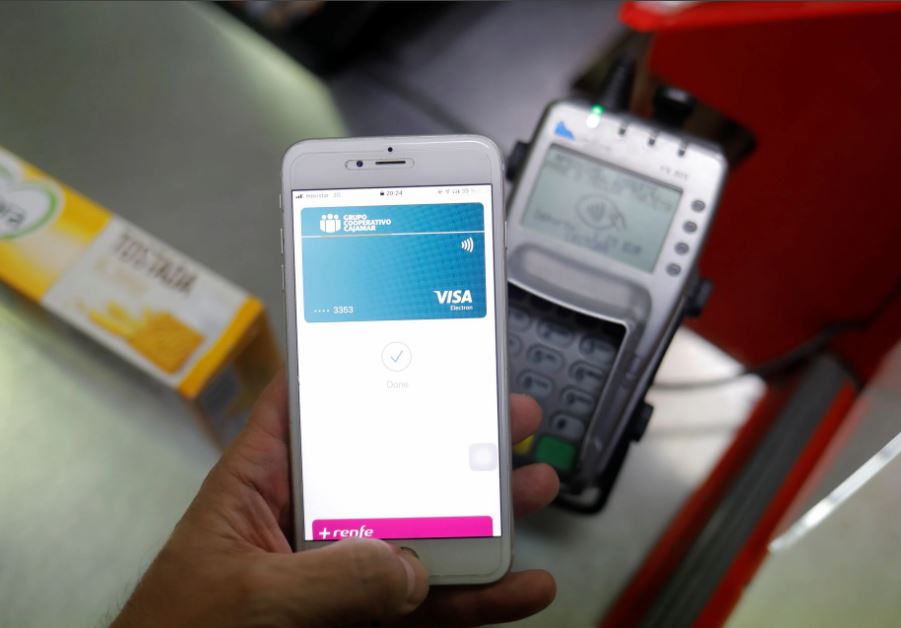 A shopper uses the mobile payment service Apple Pay at a supermarket, amid the coronavirus disease (COVID-19) outbreak, in Ronda, southern Spain October 9, 2020 via Reuters

Apple Inc is working on a service that will let users pay for purchases in installments, Bloomberg News reported on Tuesday, sending shares of Afterpay Ltd and other 'buy now, pay later' (BNPL) companies sharply lower.

The U.S. tech giant will use Goldman Sachs, its partner since 2019 for the Apple Card credit card, as the lender for the loans, Bloomberg reported, citing people familiar with the matter.

There was "no doubt the announcements ... would cause the share prices of APT (Afterpay) and Z1P (Zip) to fall ... but the new competition will take some time to play out", said Jefferies analysts in a client note. They said BNPL penetration in the U.S. was just 2% of online sales, suggesting there was room for growth.

The BNPL industry has boomed over the past year due to a pandemic-driven surge in online shopping. The trend has also attracted the attention of mainstream firms such as PayPal Holdings Inc.

The prospect of going up against a company the size of Apple, as well as other likely entrants, would pose a major test to pure-play BNPL firms which have so far gone relatively unchallenged.

The Bloomberg report said Apple Pay users would be allowed to split their payments into four interest-free installments, or across several months with interest.

Such an offering would rival similar services by Klarna, Afterpay, Zip's Quadpay, and Affirm in the United States, the sector's key growth market where competition is intense.

PayPal launched its BNPL service in Australia on Wednesday, challenging the sector by saying it would do away with late fees, an area that earned Afterpay close to A$70 million in fiscal 2020.

In a statement, Afterpay said there were "many BNPL players, each of which operates a different model and generate revenue in different ways" while "competition reinforces the significance of the sector".

A Zip spokesman said Apple's reported move was "validation that what Zip has been doing is resonating with customers and merchants" and that it was growing customer numbers despite increased competition.