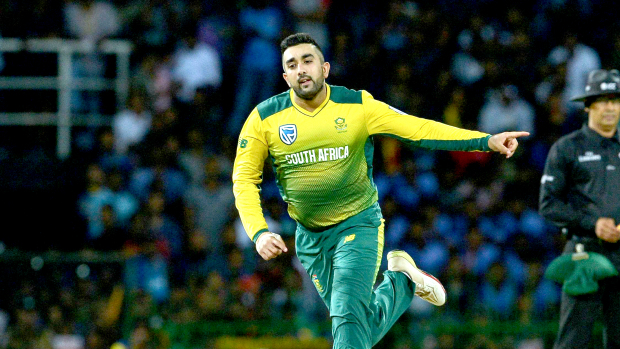 After being sent in to bat, South Africa posted 165 for seven in their 20 overs, losing their way after a fast start with Aidan Markram (39 from 30 balls) the top-scorer as a number of batsmen got starts but failed to go on and get a big score.

Seamer Mark Adair (3-39) was the pick of the home bowlers with his changes of pace, while off-spinner Simi Singh (2-19) again impressed with his accuracy and variations.

Opener Paul Stirling hit left-arm spinner George Linde (2-26) for a six in the first ball of the Ireland innings, but was out the next delivery and the home side battled from that moment on.

Only captain Andy Balbirnie (22), Harry Tector (36) and Barry McCarthy (30 not out) made significant scores as they finished on 132 for nine in their 20 overs.

Shamsi, who is the number one ranked bowler in the format, bamboozled the hosts as he turned the ball both ways and collected figures of 4-27.

“Happy with the way it came out today. Fortunate to get a few wickets as well. When we came to Ireland, we thought we were more of a supportive role to the pacers. I always try to do the same preparation that I have always done, assessing the pitch and doing a supporting role to the pacers.

“But today the pitch was holding up a bit and helped the slower bowlers, in that sense I was lucky to come into the game today. I do have a few variations in the bank, I haven’t exposed all my tricks, and want to surprise the batsmen later. I just try and keep it simple, pitch the ball in the same area, was just trying to bowl according to a plan and keep things tight for the team,” Shamsi said after the match.

The second match in the three-game series will be played in Belfast on Thursday.