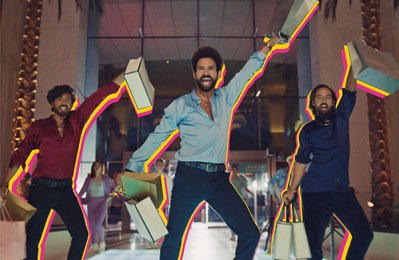 Yas Island Abu Dhabi, a leading leisure and entertainment destination, has announced a collaboration with Spotify, the world's largest music streaming service provider, as part of the Stayin’ on Yas campaign, which has taken the internet by storm.
Inspired by the Bee Gees classic Stayin’ Alive, the new summer anthem Stayin’ on Yas campaign encourages staycationers and vacationers to ‘break like you mean it’, and features three holiday-makers as they experience the activities on Yas Island.
Following the launch of the retro-style music video which has been viewed more than three million times on their Instagram account and over a million times on its YouTube account, Yas Island has partnered with Spotify to launch three playlists, styled as ‘staylists’.
Staycationers can select the tunes to accompany their leisure break from Chillin' on Yas which features laid-back vibes such as Quiet Waves by All Day Island and Sun & Buns by Duo on Mars.
For those seeking to get the party started, Kool & The Gang, Earth Wind & Fire and Sister Sledge provide the soundtrack for Groovin' on Yas, whilst those who simply can’t get enough of Stayin' on Yas, can have summer’s new anthem on repeat.
Setting the soundtrack for the staycation on Yas Island are theme parks, racing, climbing and flying to shopping, dining, golfing and luxury hotels, all in one 25 sq km destination.
Set against a backdrop of Yas Island’s attractions including theme parks Ferrari World Abu Dhabi, Yas Waterworld Abu Dhabi, and Warner Bros. World Abu Dhabi; Yas Mall, Yas Links Abu Dhabi golf course and adventure hub CLYMB Abu Dhabi, Stayin’ on Yas redefines what it means to be on a staycation and takes listeners on a lyrical journey.
With safety and wellness guidelines firmly in place, the 70’s inspired ode to fun celebrates the rejuvenating power of staycations and reminds audiences of how important it is to take a break, whilst providing a message of positivity and hope as well as a snapshot of holidays past, present and future.
Released to complement summer holiday packages, the campaign brings holidaymakers a glimpse of blue skies, sunshine, wave machines and theme parks and other holiday experiences in the UAE.
Yas Island Abu Dhabi is located on the shores of Abu Dhabi - just 20 minutes from downtown Abu Dhabi and 50 minutes from Dubai.-TradeArabia News Service