All eyes on The Lady, played by Alicia Vikander

Howling for an adventure

GULF WEEKLY: Have you ever imagined what Lord of the Rings might look like, if it was an arthouse film? No? Well, now the film world has The Green Knight to speak to that particular kind of fantasy.

Directed by David Lowery (Pete’s Dragon), The Green Knight brings together breath-taking cinematography, immaculate acting and a surreal cinematic experience to tell a story based on the 14th century-poem, Sir Gawain and the Green Knight.

The film focuses on the tale of Gawain (good luck pronouncing that, the film itself has three different versions), who is the nephew of King Arthur (Sean Harris).

Meandering through life at the start of the film, Gawain (Dev Patel) is a beacon for wandering-but-not-lost millennials, aspiring to be a knight, but never sober enough to actually embark on a quest. He is in love with his consort Essel (Alicia Vikander) but would never marry her, because of the difference in their status.

Gawain’s mother, in this rendition, is none other than the sorceress Morgan le Fay (Sarita Choudhury), who, in an apparent attempt to straighten her son out, conjures up a nemesis – the Green Knight. 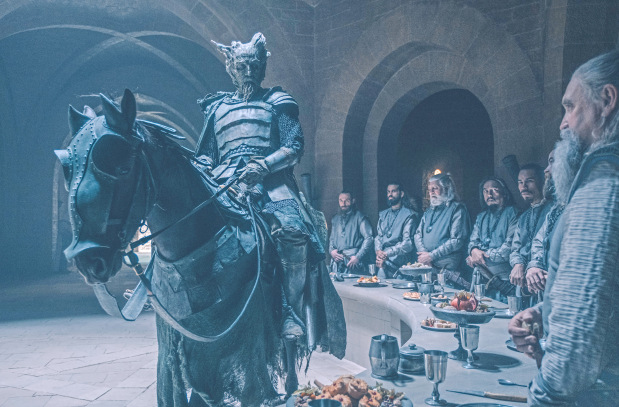 A (k)night at the king’s roundtable

The knight shows up at one of the famous roundtables of the king and lays down a challenge – he invites anyone present to strike him and win his green axe. A year later, the knight will return an equal blow to this party.

Gawain takes up the challenge after realising that unlike the knights he aspires to be, he does not have any interesting tales. Instead of fighting Gawain, the knight simply offers him his neck, and Gawain, in his youthful arrogance, decapitates him.

The knight is unfazed, stands up a few seconds later and rides away, laughing. A year later, Gawain embarks on a journey to face the knight and get his comeuppance.

Right off the bat, this movie will not appeal to everyone. It does not have the army rushes, political intrigue, sword fights and bright neon-lit magic that draws crowds to fantasy films and TV shows.

It’s a slow and layered burn. And one that can be frustratingly vague when watching the movie, but exhilarating to discuss afterwards.

Dev and Alicia deliver astounding performances as always, reflecting the nuance and gravity of an essential death sentence very subtly yet powerfully.

Alicia plays two characters in this movie, and personally, I really enjoyed the connection yet dissonance between the two – one a lowly lover of a knight and the other a powerful lady of a Lord.

As expected when a poem is made into a movie, the metaphors are rich and beautifully conveyed, both in the script and on the screen. You will find yourself arguing whether the knight represents a call to adventure or an allusion to nature.

And never in a single movie, have I seen the meaning of the colour green so lovingly analysed. Alicia, in her role as The Lady, particularly shines during a monologue towards the end of the film.

One note – it would be prudent to read up on King Arthur and his legends before you watch this movie, because it does not waste any time on clarifying allusions, instead assuming you know the Pendragons, Morgana and Merlin like they were your next-door neighbours.

All in all, I find myself in the unique position of not recommending an astounding movie, at least for the average film-goer. In fact, I noticed a few of these people leaving the theatre early when I watched the movie.

However, for the aspiring film makers, avid fantasy lovers, and enjoyers of surreal slow-paced experiences, watching this in a theatre is a revelation. Everything from the mise-en-scène to the sound engineering is done with pure passion and delightful detail.

Watch this movie for its unforgettable visuals and murky plot, join the cult following it will probably gain over the years, and then lord it over the cultural proletariat for eternity.