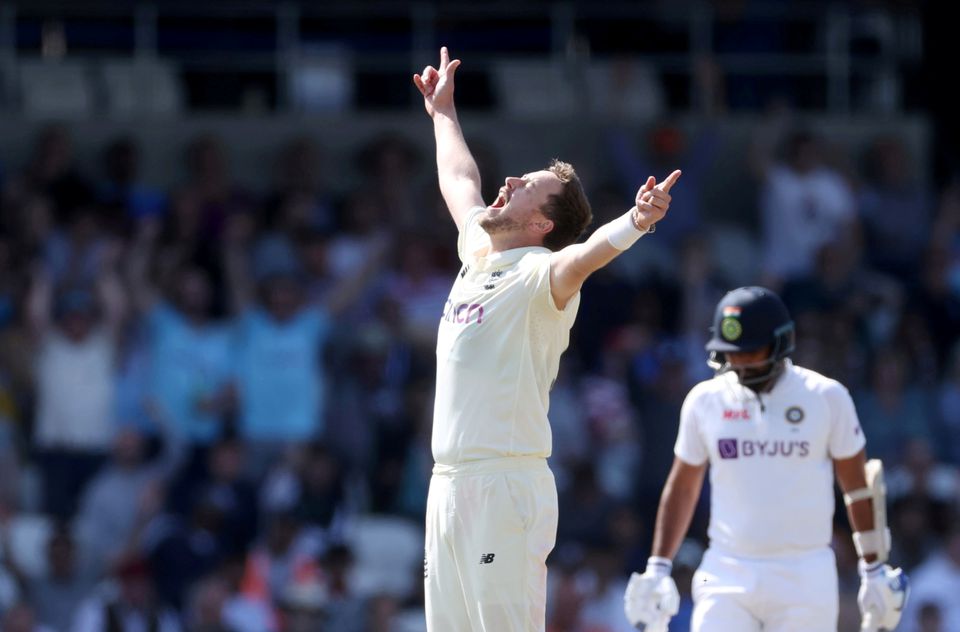 England's Ollie Robinson struck four times with the second new ball as the hosts thrashed India by an innings and 76 runs to level the series on day four of the third test at Headingley on Saturday.

Resuming on an overnight score of 215-2, the visitors crashed to 278 all out before lunch, with the Indian middle-order once again failing miserably against the pace and guile of the England fast bowlers.

Cheteshwar Pujara (91) was the first to be dismissed, shouldering arms to a Robinson in-swinger that was given out leg before wicket on review, before Virat Kohli (55) edged one to Joe Root soon after completing his half-century.

Ajinkya Rahane's dismissal for 10 off James Anderson all but ended India's hopes of overhauling the England lead, with Ravindra Jadeja's late flourish of 30 offering some entertainment but eventually being in vain.

Robinson finished with figures of 5-65, while Craig Overton chipped in with three wickets.

Opting to bat on day one, India were shot out for 78, undone by a superb spell of new-ball bowling by veteran Anderson.

In reply, England, led by Root's wonderful 121 and half-centuries by Rory Burns, Haseeb Hameed and Dawid Malan, were bowled out for 432, claiming a 354-run lead.

The fourth test starts at The Oval on Thursday with the series tied 1-1.