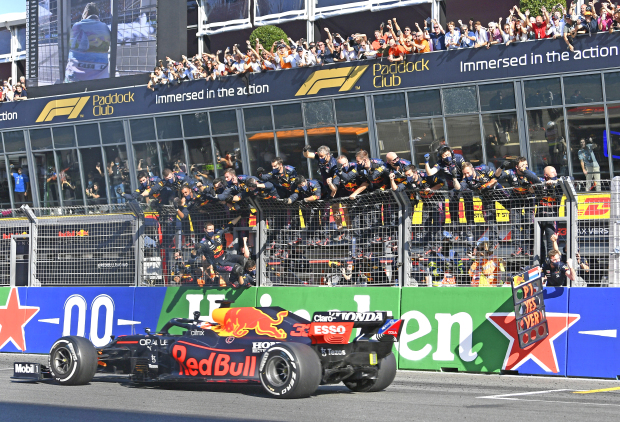 ZANDVOORT: Max Verstappen won his home Dutch Grand Prix for Red Bull yesterday and took the Formula One championship lead in front of a roaring, dancing army of fans hailing their hero with orange flares and flags.

The 23-year-old dominated from pole position to take the chequered flag, in the first Dutch Grand Prix for 36 years, 20.932 seconds ahead of Mercedes’ seven-times world champion Lewis Hamilton.

Hamilton’s Finnish teammate Valtteri Bottas completed the podium, moving up to third in the championship, with the rest of the field all lapped by Verstappen.

Hamilton took a bonus point for the fastest lap, after a late pitstop for fresh tyres, but Verstappen overturned a three-point deficit to go three points clear of Hamilton, with 224.5 to the Briton’s 221.5.

The victory was Verstappen’s seventh in 13 races, with nine rounds remaining, and set off a gigantic beachside party.

“As you can hear, it’s incredible,” said the winner over the roar of the crowd. “Obviously, the expectations were very high going into the weekend and it’s never easy to fulfil that, but I’m of course so happy to win here, to take the lead as well in the championship as well.

Hamilton questioned his team’s two-stop strategy but recognised Verstappen was just too far down the road and out of reach. He hailed the 70,000-strong crowd for its passion and enthusiasm.

“It’s been an amazing weekend. Max did a great job, congratulations to him. I gave it absolutely everything today, flat out. I pushed as hard as I could but they were just too quick for us.”

Verstappen was already 1.7 seconds ahead after the first lap and 3.5 clear when Hamilton pitted first on the 20th of 72 scheduled laps, a move that made a second stop inevitable and had the champion complaining that it was too early.

Red Bull responded immediately by bringing in Verstappen on the following lap and changing his car’s tyres nearly a second faster than Mercedes had with Hamilton.

Bottas stayed out with clear instructions to hold up Verstappen but the Red Bull driver wasted no time in going back in front on the pit straight, with the grandstands erupting with cheers.

Bottas made his own late pitstop but was then told, too late, by Mercedes to abort his attempt for fastest lap and Hamilton had to reclaim it right at the end.